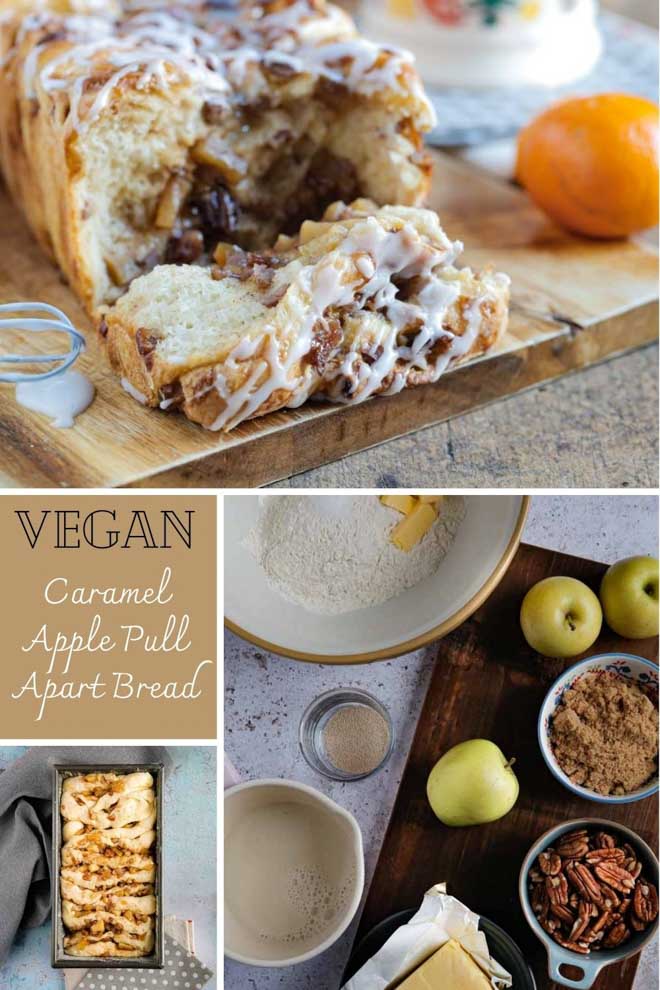 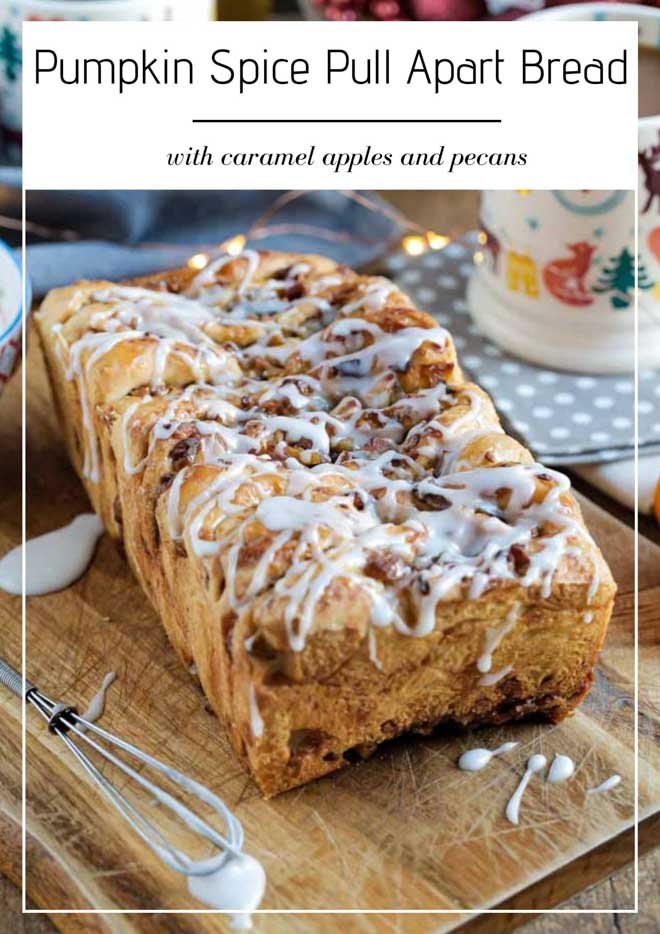 Being made of all things sweet, ooey and gooey this pull apart bread is just amazing – especially warm out of the oven. The perfect bread for a cosy weekend morning!

I’ve made it a total of four times now.  In the first incarnation I didn’t think about how I was going to stack the layers before I came to actually stacking them and basically ballsed it up completely.  I had to get Phil, spatulas, a fish slice and 2 pairs of hands involved.  It tasted fantastic but looked really wonky when it was baked.  I cut too many layers and cut them too short so it all sort of scrunched up in the tin, blossomed out at the ends and sunk a bit in the middle.  Didn’t stop us demolishing it in just one sitting though. 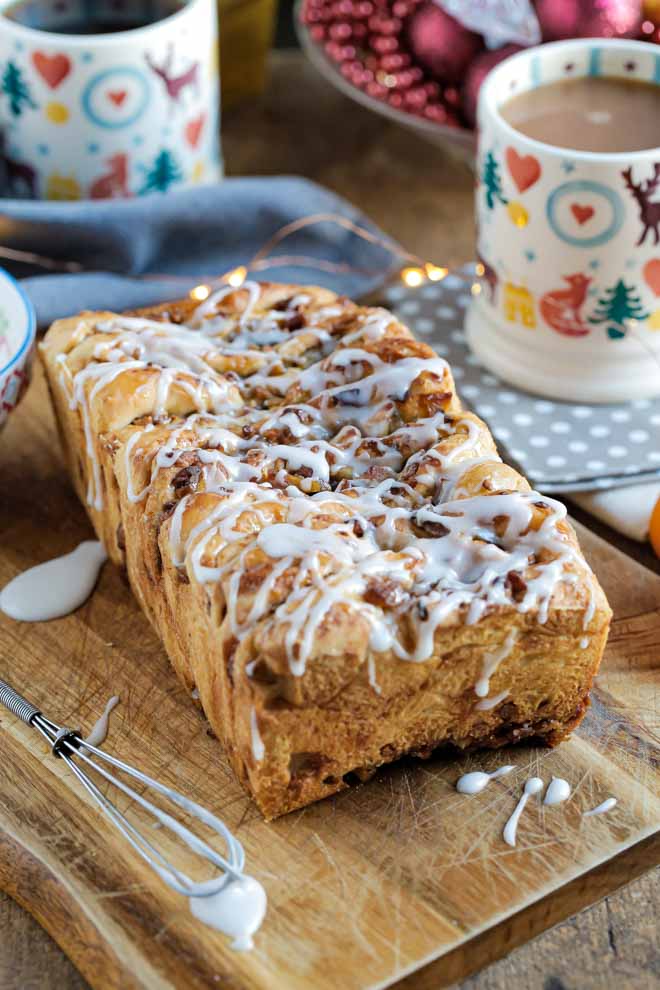 The second time I got the logistics right, took a few videos of the process as I thought words might not adequately explain the stacking process and just about managed to get the finished thing photographed before we literally sat on the floor tearing piece after piece off.  We didn’t bother with lunch that day.

The next two times were entirely made by Phil.  He quite enjoys a bit of weekend baking and I quite enjoy having a day off from cooking 😉 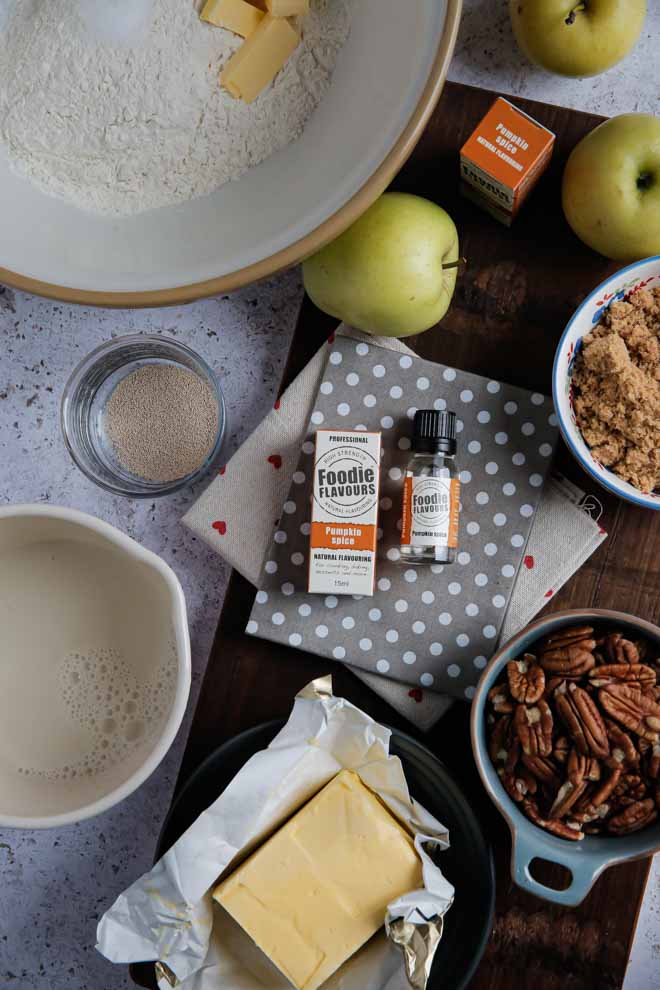 I’m utterly in love with the Pumpkin Spice flavouring from Foodie Flavours.  It smells just like autumn and gives a wonderfully gentle, spicy, citrusy flavour to whatever you put it in.  It solves the problem of having to have many different jars of spices in the cupboard to get that iconic pumpkin spice flavour.  And because their flavourings are all high strength you don’t need much for a recipe.  Anything from around 20 drops for this pull apart bread or these Pumpkin Spice Cinnamon Swirls to just 5 drops for this Vegan Pumpkin Spice Latte.

How to make this delicious pumpkin spice bread:

Start by cooking the apples.  This allows them enough time to cool before you add them to the layers of dough.  I’ve used vegan butter and brown sugar for that extra sticky sweet caramel flavour.

Stir in the Pumpkin Spice.   And take a moment or two to fully enjoy that caramel apple pumpkin spice smell.  Ahhhhhh.  I’ve used around 20-25 drops for the perfectly spiced flavour.  Stir in the chopped pecans and set aside to cool. 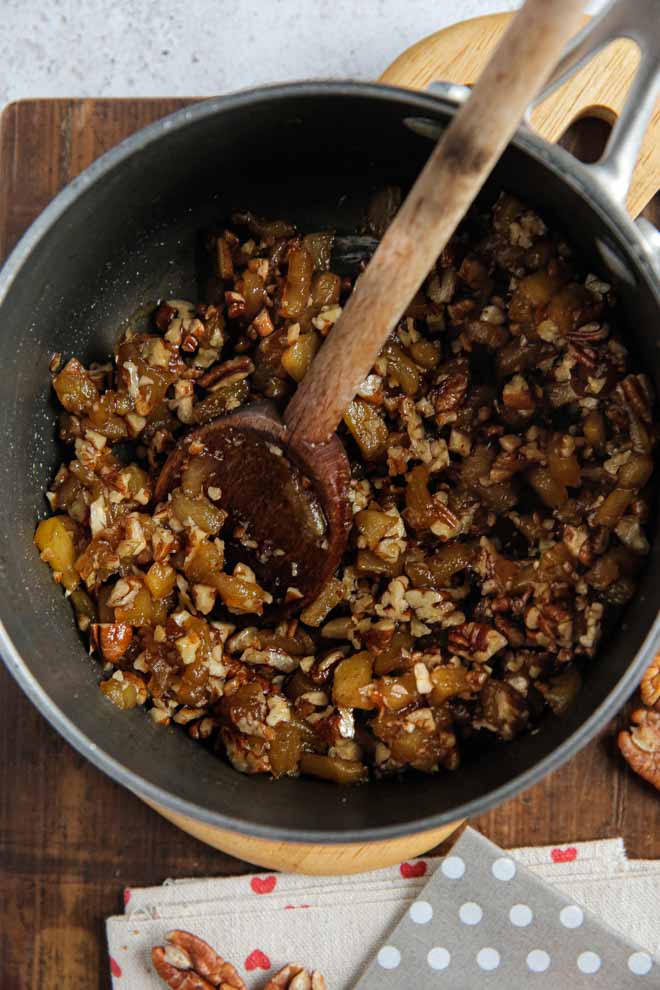 Make the dough.  This is a really simple process, nothing scary about making your own bread.  Nor anything quite as satisfying.  There’s something almost primal about homemade bread.  Maybe I’m just releasing my inner cave woman.  AND you get bread at the end of it all.  Carbs be damned, it’s nearly Christmas.  The only thing to be aware of is the temperature of the liquid – you want it only just lukewarm.  When you put your finger in to test it you can’t really tell if it’s warm or cold.

Knead the dough for a good 5-10 minutes.  This is what makes the dough stretchy and elastic and gives bread its, well, bread like texture and crumb.  For a bit more about the science I’ve written a comprehensive guide for how to make your own bread.

Leave the dough to prove in a warm place until doubled in size.  This can take anywhere from half an hour to over an hour dependent on how warm the place is.  You don’t want it any warmer than 40 degrees C. 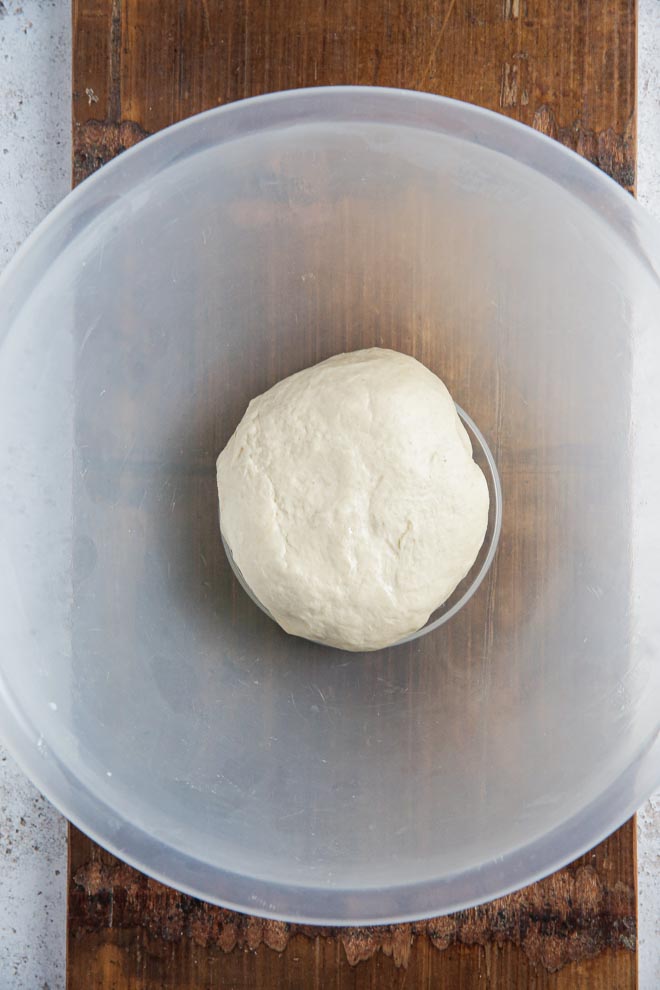 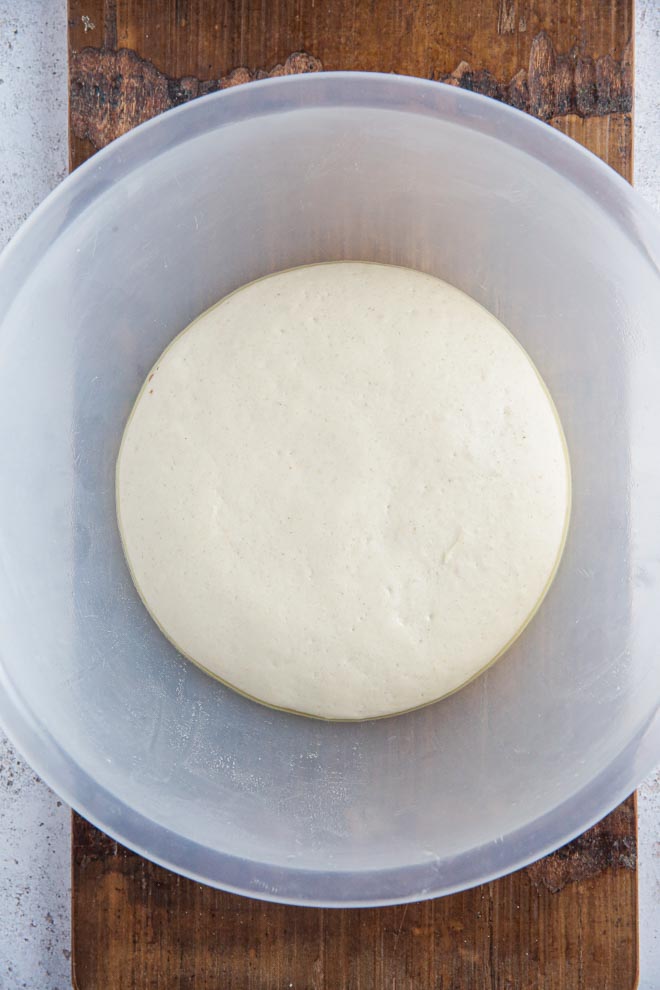 Once your dough is proved roll it out to a large rectangle.  Use plenty of flour during rolling and move the dough around a little to prevent it sticking.  You want the rectangle to be roughly 34 cm long and 17 cm wide.

Brush with melted butter.  Because now is not the time for moderation or restraint.

Cut the dough before you start to layer up.   This was where I made the mistake the first time.  I topped the dough with everything then realised I’d have to move everything in order to get the layers so the final bread would be ‘pull apart’.  Instead, cut the whole rectangle in half lengthwise then in half across the middle so you end up with 4 quarters.

On the first quarter sprinkle the apple and pecan mix then top with a little cinnamon sugar.  Because cinnamon sugar makes everything better.  Top that with another piece of dough and repeat the layering process until you’ve used all the dough. 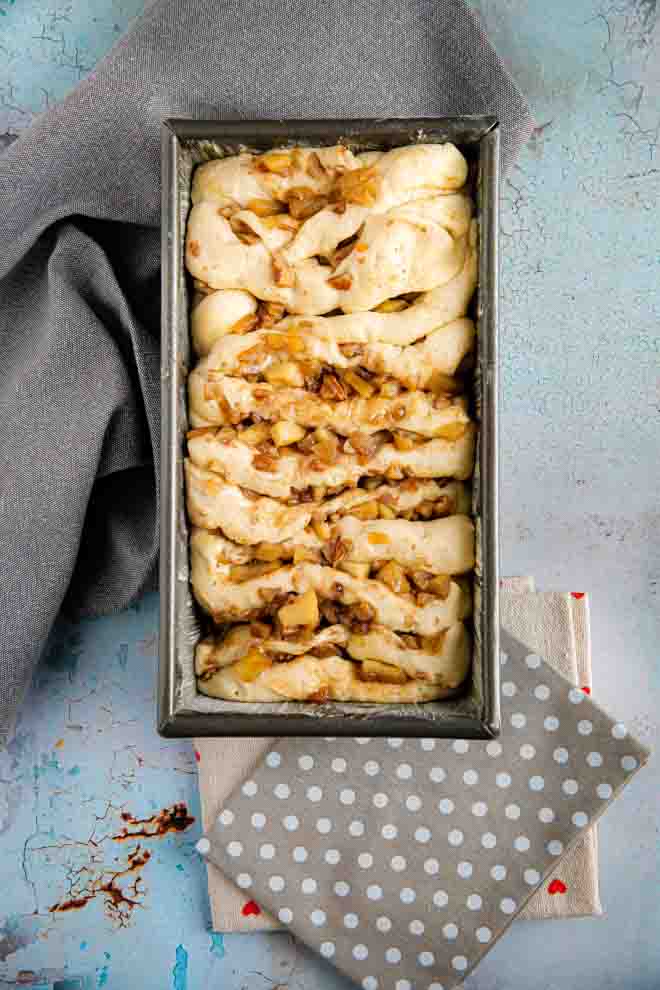 Cut the layered dough into 6 equal pieces.  I tip the prepared tin up so it’s sitting upright, this just makes it easier to lift the dough into it without it falling over.  Once you’ve finished layering put the tin flat and sort of fan the layers out so they fill the tin.

Leave to prove once again then bake in a hot oven.  And try and restrain yourself for at least 10 minutes for it to cool enough to eat.  An extra drizzle of icing is optional but thoroughly recommended! 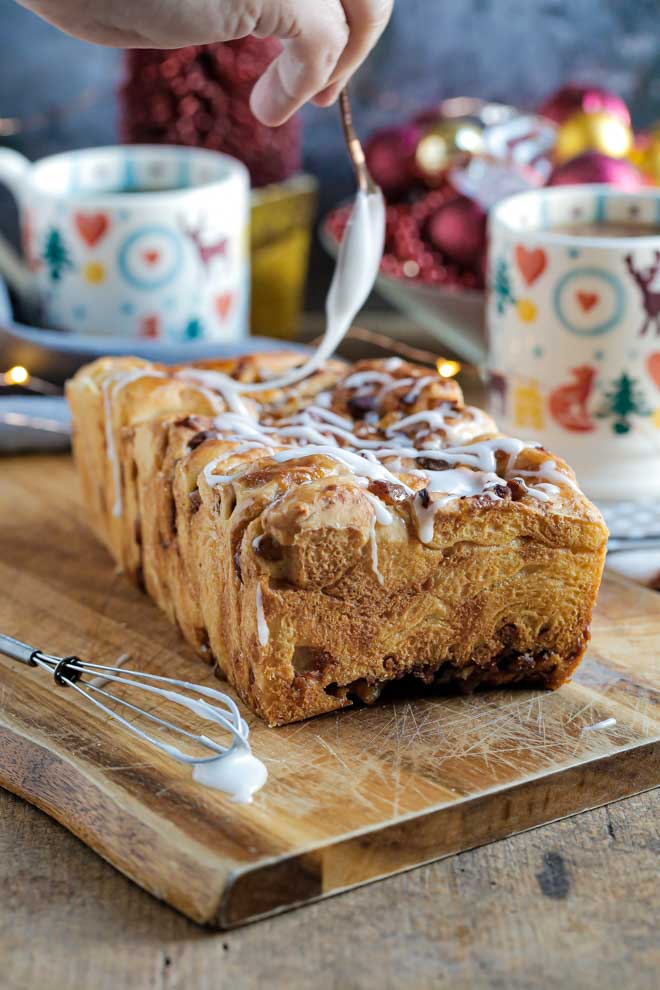 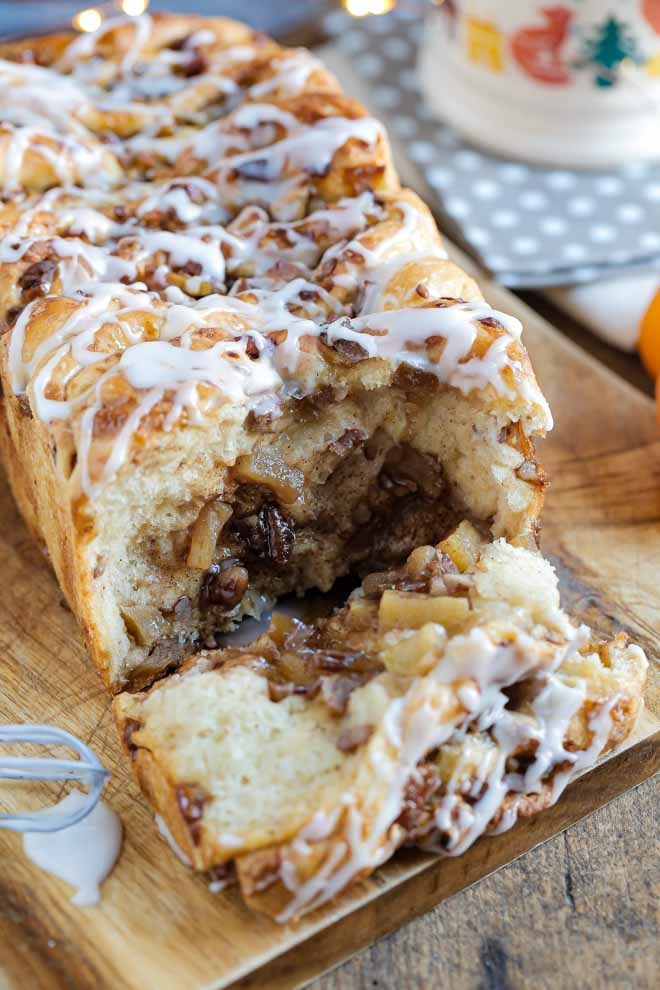