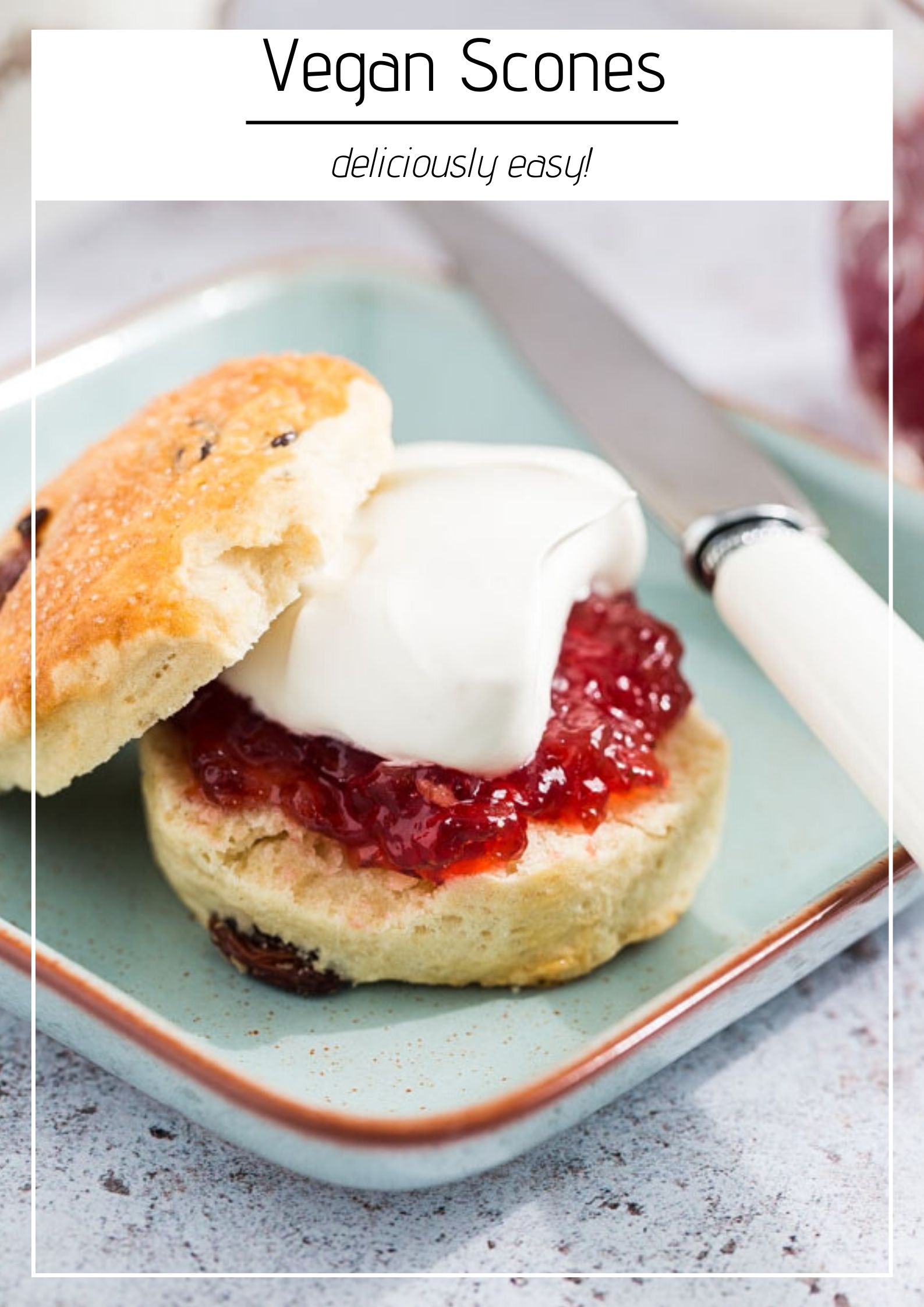 These vegan scones are just as easy and delicious as traditional ones with soft fluffy centres and sweet golden tops! Serve with a super easy homemade jam and vegan cream for the perfect afternoon treat!

The secret to vegan scones is exactly the same as any traditional scone recipe if you want that light fluffy texture and a lovely golden crust sparkling with sweet sugar crystals.  I don’t know about you but I’ve had far too many scones that are style over substance.  Everything from giant stodgy things to teeny tiny things with one sultana per scone.

These vegan scones (which are incredibly easy to make) have perfectly light and soft middles and lovely golden tops.  And you can have them with or without fruit if dried fruit isn’t your thing.  Phil was adamant he didn’t like dried fruit pretty much since I met him.  He started to change his mind right around the time of these Teacakes.  And was 100% on board with dried fruits not being chewy bits of horror by the time we got to Vegan Christmas Cake! 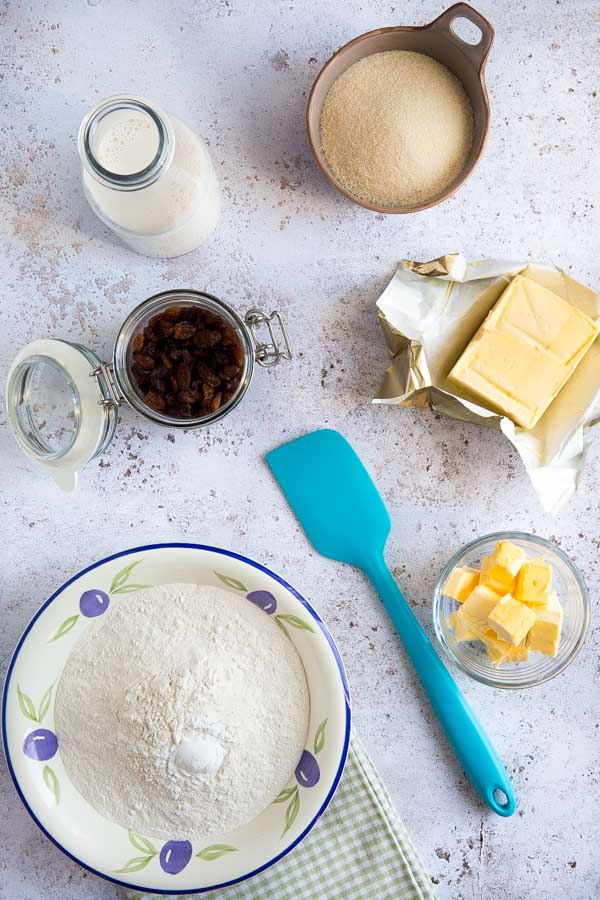 Personally I love a fat juicy sultana.  But you can use raisins, mixed dried fruit, mixed peel, goji berries, dried apricots or even chocolate chips if that takes your fancy.  Or leave the fruit out entirely for a change.

How to make vegan scones

There’s really no mystery to making vegan scones.  It’s very much the same process as a traditional one with just a couple of ingredient swaps.  To get that lovely fluffy centre, less is more because the dough needs minimal handling.  Much like making pastry it’s simply a case of bringing the ingredients together into a manageable dough rather than kneading the heck out of it as you would a bread dough.  Let’s talk ingredients:

Vegan butter – I prefer the hard block butter over the spread for making scones.  It has a higher fat content and melts at a lower temperature giving a better taste and texture to your scones.

Dairy free milk – I’ve used unsweetened almond milk in this vegan scone recipe but you could substitute with soy or oat milk. 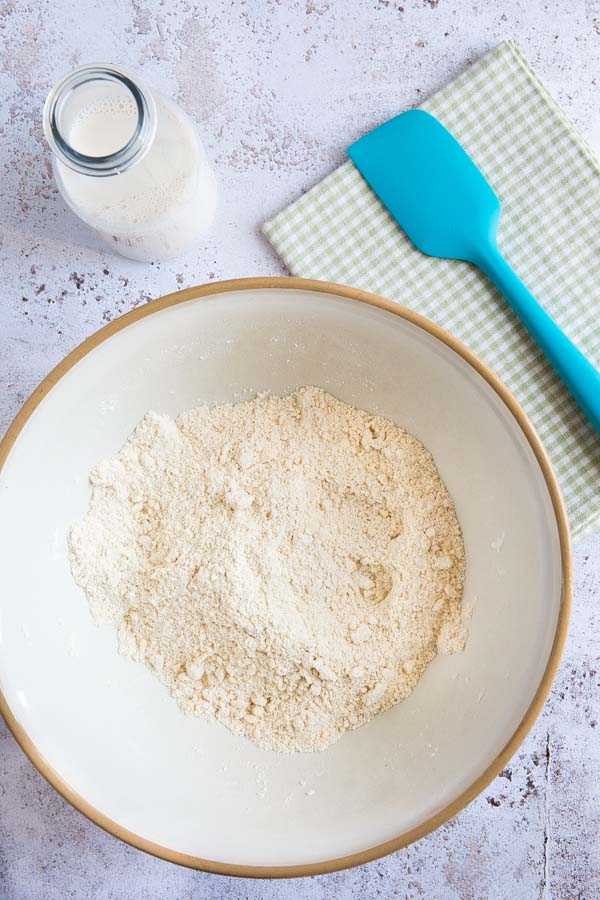 To make the scones you start by rubbing the butter into the flour.  I chop the butter into smallish squares to make it easier to do this rather than trying to break up a large block of butter with your fingers!  To rub any fat into flour you simply pick up the pieces of butter in your fingers and using a light touch squash the fat with some of the flour to break it up.  Repeat as the pieces of fat get smaller until you have a mixture that resembles sand or fine breadcrumbs.  There’s not a lot of fat to flour in this recipe compared to pastry so it won’t take very long.

Then you stir in the sugar then the liquid.  Another tip is to not add all the liquid at once.  Flour and its absorbancy can be affected by all sorts of different things – the type of flour, the brand you’ve used and even the humidity in your house can all factor into how much liquid the particular flour you’re using will absorb.  Other factors also play a part – how accurately you’ve weighed all your ingredients and how much you might have tamped down the flour as you measured. 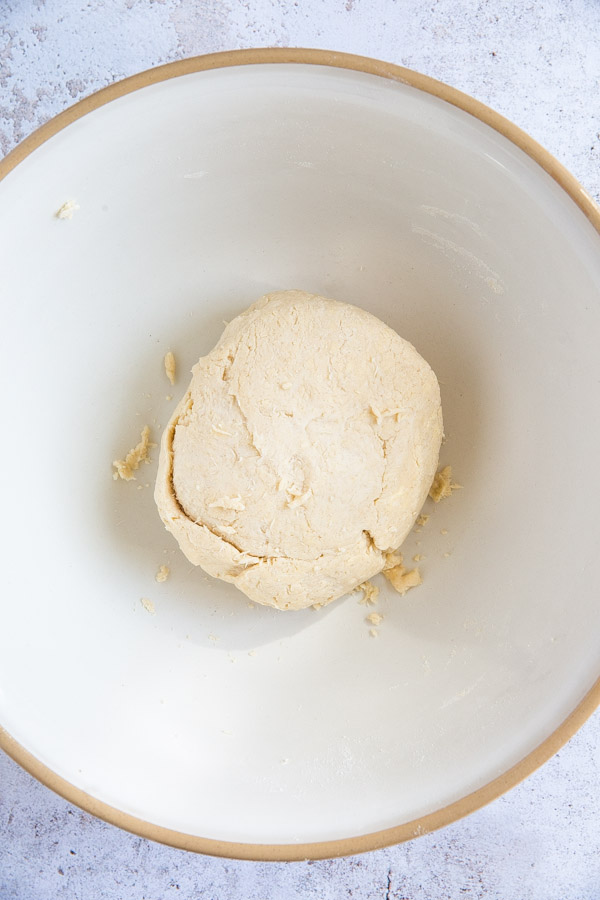 So for these scones add nearly all the milk to make a soft but not overly sticky dough, adding a little more milk if needed.  And only mix enough to form a dough.  There’s no need to knead 😉

Lightly dust your work surface with flour then roll the dough out to around 1 inch (2 1/2 cm) thick.  I’ve used metal cutters as they’re sharper than plastic and give a cleaner cut.  Push the cutter down firmly and cleanly.  Don’t be tempted to twist the cutter as this is what misshapes the dough and you end up with lopsided wonky scones.  Not that I wouldn’t eat those too! 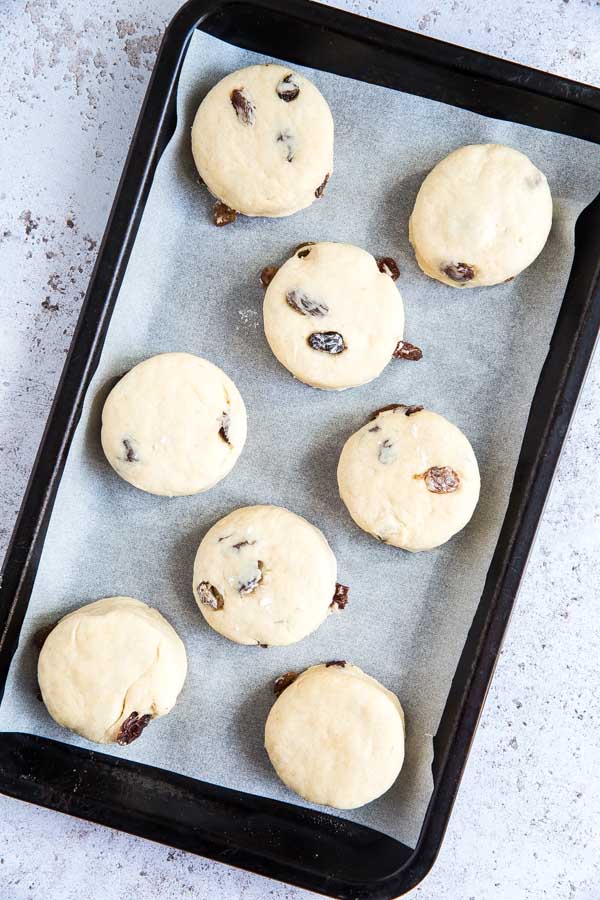 I brush the tops with a little extra milk then sprinkle on just a pinch of demerara sugar.  The larger sugar granules give a wonderfully sweet and crunchy topping. 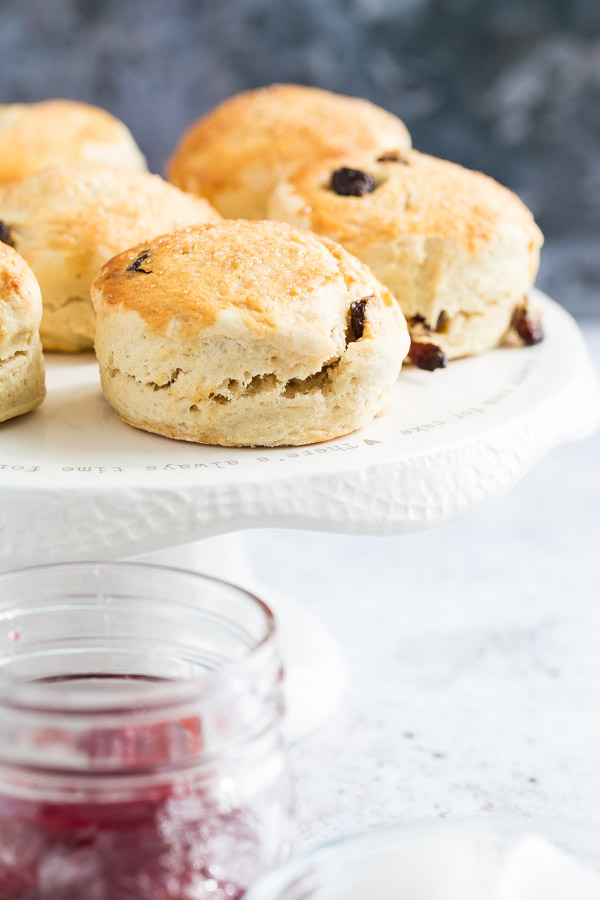 I also can’t eat a sweet scone without a good dollop of jam and cream.  I wholeheartedly recommend this ridiculously simple Berry Jam recipe.  And thankfully the good people at Elmlea have seen fit to provide us with a vegan double cream that can also be whipped!  This stuff is amazing!  It’s not clotted cream and doesn’t have the same consistency.  In fact it doesn’t really whip quite as thick as even normal double cream.  But it IS a soft whip and is the creamy cherry on the top of these vegan scones!

If you can’t get hold of Elmlea or it hasn’t made its way to your part of the world yet you can put a tin of coconut milk in the fridge overnight then scoop out and whip the thick white creamy part.  I don’t find it too strong a flavour of coconut and maybe one day someone will invent a legitimate vegan clotted cream.  Till then I’m happy – scones + jam + soft whipped cream = heaven.

Excuse me, I’m off to split another scone 😉 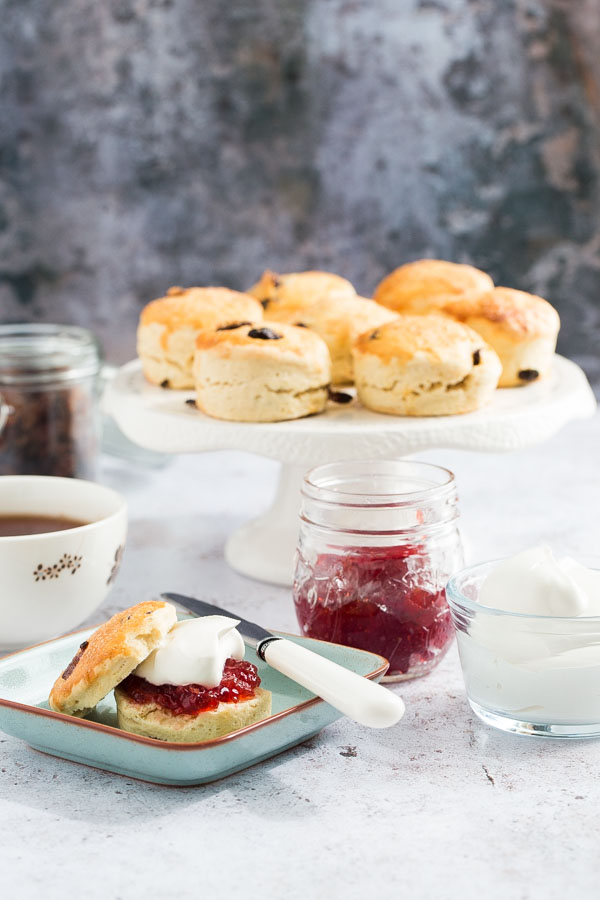 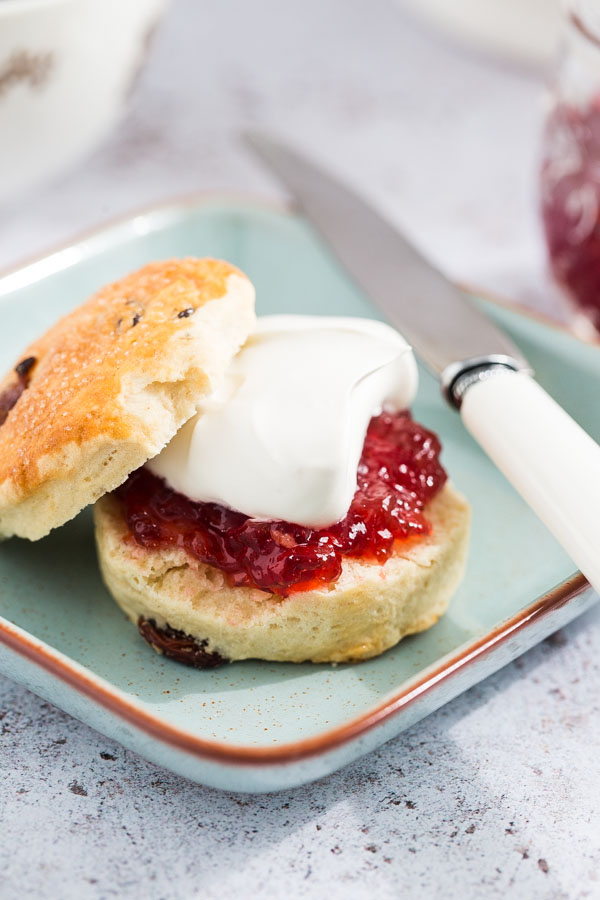