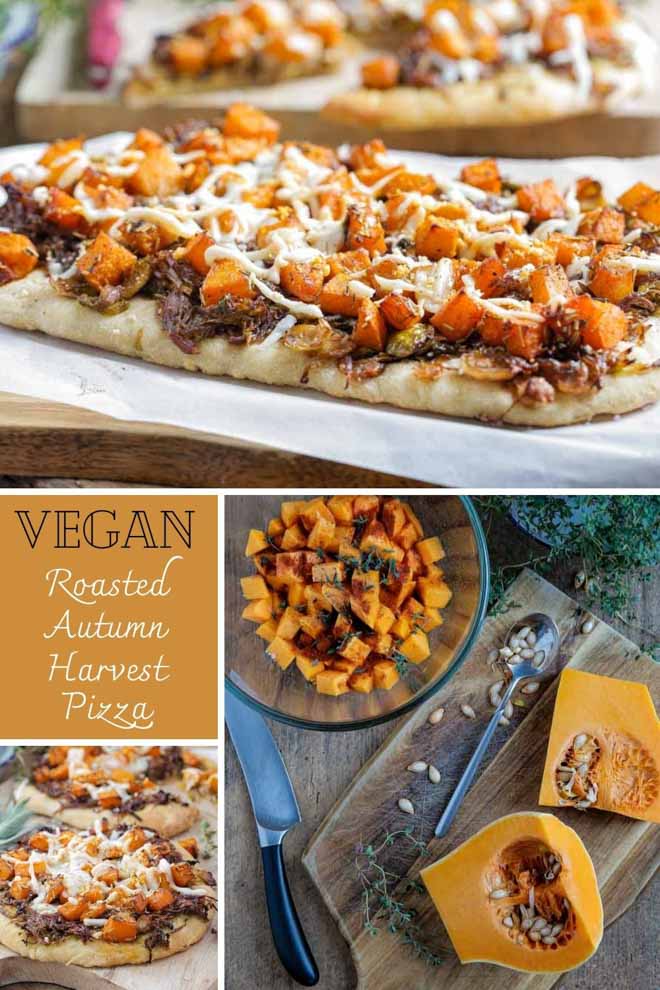 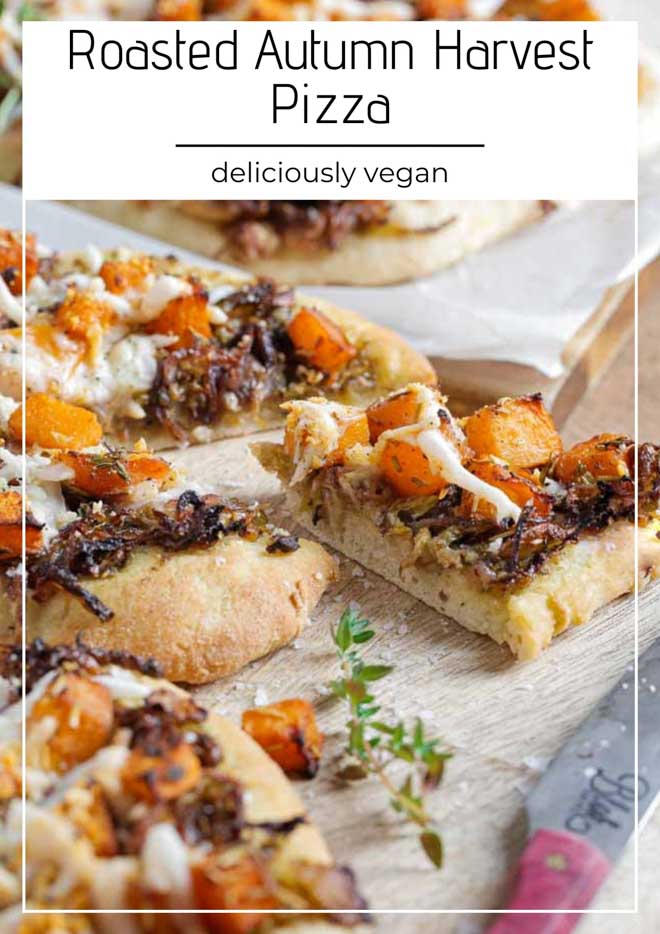 Simple but delicious, this autumn harvest pizza is full of all the best seasonal flavours, herbs and gentle spices. Top with tangy vegan cheese for a comfort food favourite!

I’m subtitling this post with “how to survive a second lockdown by eating ALL.THE.THINGS.”  What a weird world we’re in right now.  How’s your November looking?  Ours is constantly changing our plans while trying to avoid having to go out but feeling a little stir crazy, missing family and still trying to organise a MAJOR life change next year.  One of the plans that got changed was a few days break at the beginning of this month.  Instead of finding a cheap Air B&B we had a stay-cation instead.  We ate, read, napped and binged The Haunting of Hill House on Netflix (if you love creepy you will LOVE this).  We also spent some time cooking together.  Which is how this autumn harvest pizza came about. 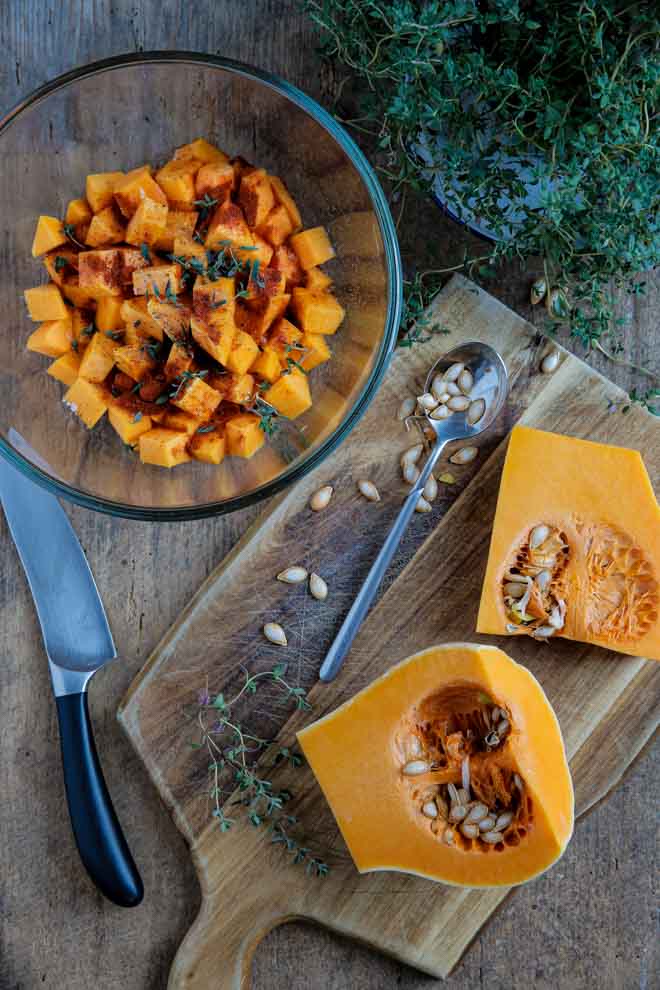 I’d bought a squash a) because it’s autumn and b) because I’d planned on making Sticky Sausage and Veg Tray Bake for dinner.  Then Phil decided he fancied pizza.  Nothing to do with him being a pizza addict.  I don’t really like ordering take-out pizza.  I think they’re a ridiculous amount of money for a bit of bread dough, some basic tomato sauce and a few veggies.

So the squash got repurposed, along with some sprouts and a parsnip. 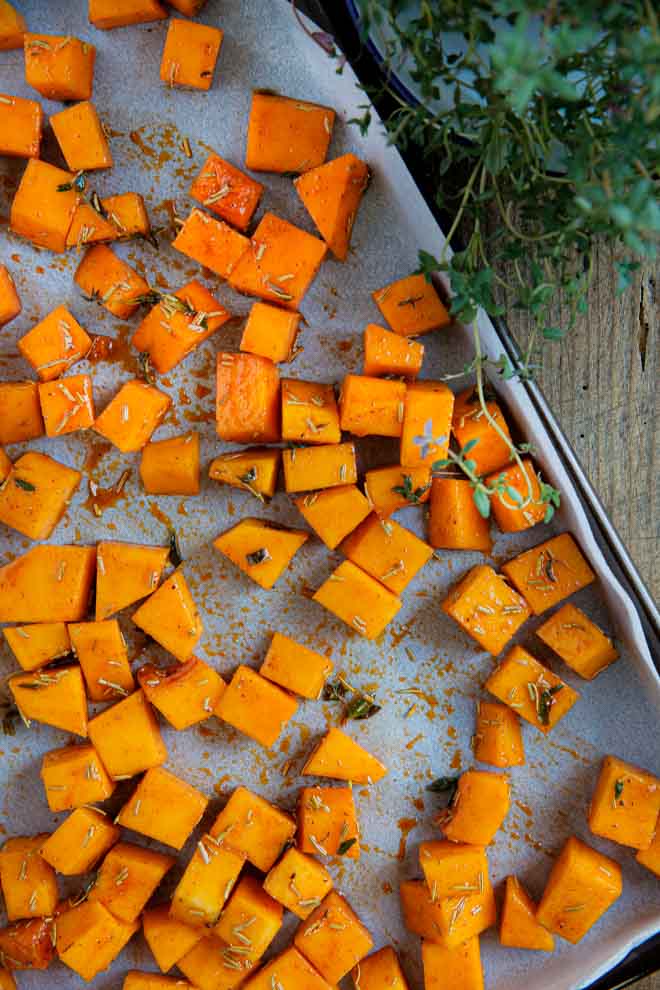 How to make a roasted veg vegan pizza:

Make the flatbread pizza base.  This is something that can even be done a couple of days in advance and kept in the fridge.  It’s a yeast dough but because we’re using plain flour it doesn’t require much kneading – just enough to bring the dough together.  I’ve grated a parsnip and added it to the pizza base as well.  It gives it a wonderful texture and even more autumn flavour.

Roast the squash.  Simply toss the diced butternut squash with some oil, the herbs and spices and roast for around 35 minutes.

Make the onion ‘jam’.  I LOVE onion jam.  I have it in sandwiches, with burgers, on crackers with vegan cheese and can literally eat it by the spoonful.  It’s super easy to make but gives so much flavour.  All you do is slowly cook the onions over a low heat until the natural sugars come out and they start to caramelise.  I’ve jujjed (?) them up with a bit of balsamic and brandy and stirred in some vegan butter for extra unctuousness.  I’ve also mixed them with shredded sprouts to form the base of the topping because I love sprouts and they’re so full of goodness.  Who said pizza can’t be a little bit healthy? 😉 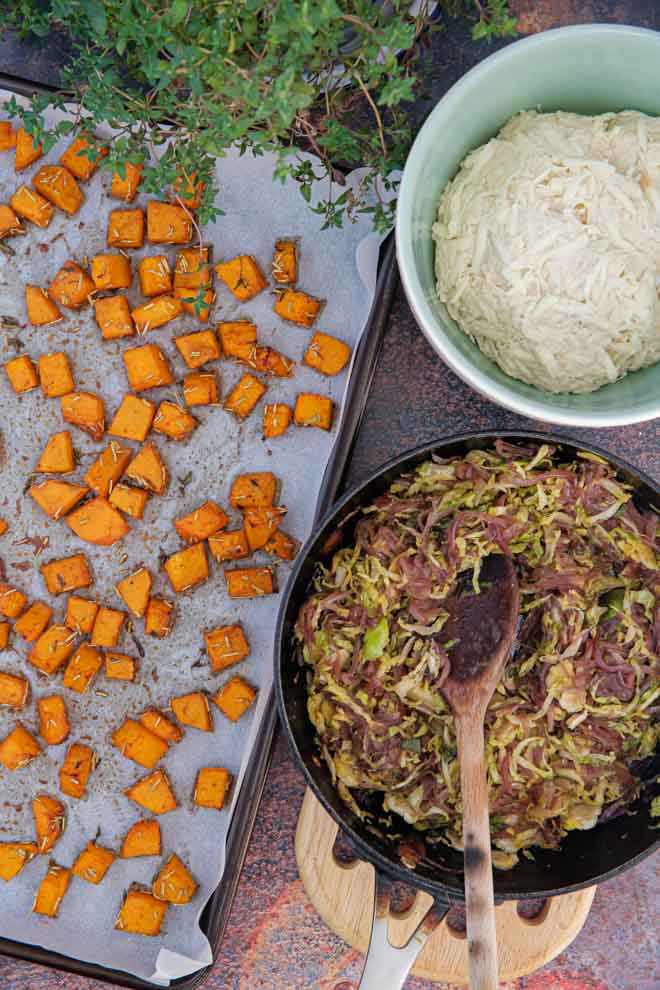 Roll the dough out on a lightly floured surface.  Or use your hands to push it into whatever shape you want.  This dough is quite forgiving and if it’s chilled it’s even easier to work with.  These pizzas serve 2-4 and you can make smaller individual ones or a couple of larger ones.

Assemble your pizza.  Spread the onion and sprout mixture over the pizza base then scatter over the roasted squash.  Sprinkle over the cheese and bake for 20-25 minutes until golden and crispy. 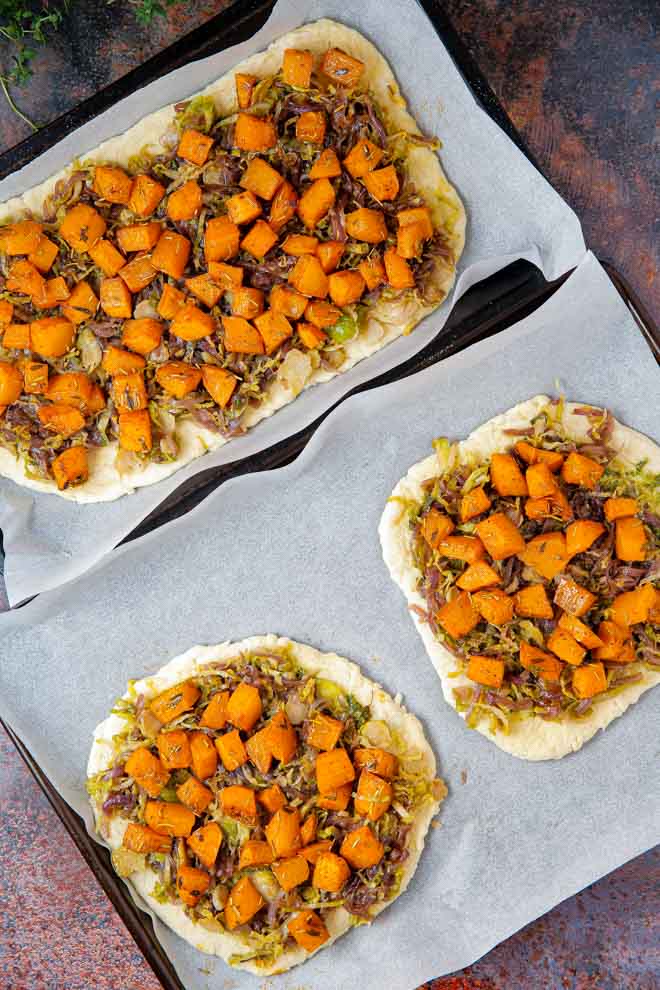 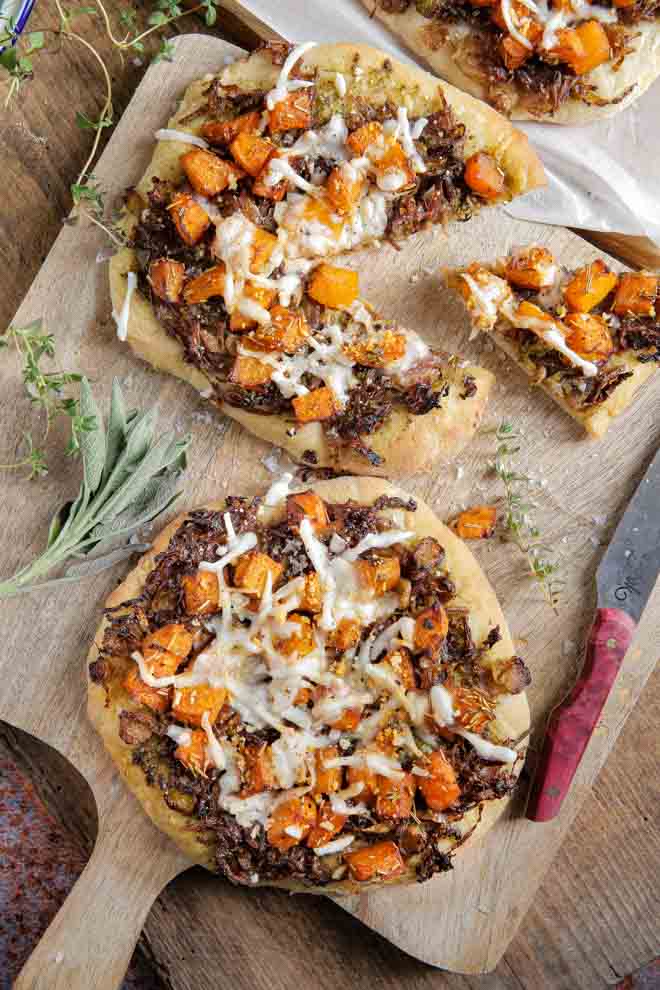 I love the way the onions become a little bit charred, giving a wonderful smoky flavour.  These pizzas are SO full of flavour we literally just stood there after they came out the oven cutting pieces off and devouring.  This is feel good pizza.  It’s flavour after flavour that’s not been buried under a mountain of cheese.  Don’t get me wrong I also love cheese.  I just don’t think there needs to be more of it than anything else on a pizza.  However if super cheeeeeezy pizza is your thing go right ahead and load it up.  If you’re going to make pizza from scratch you do it your way. 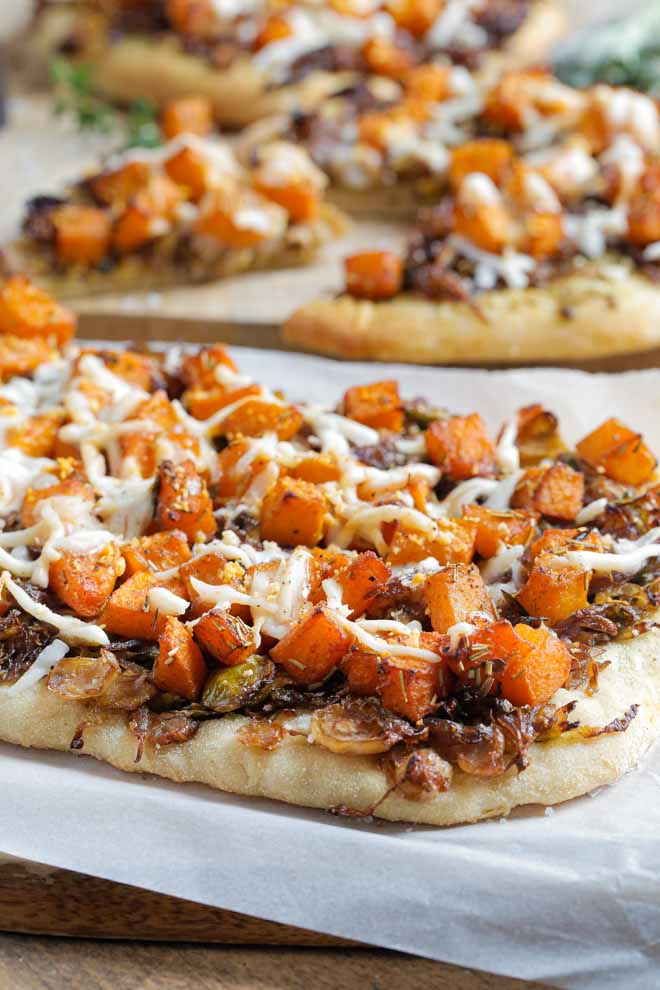 I’d love to hear from you if you give this Vegan Autumn Harvest Pizza recipe a try! Just leave a comment as it’s so helpful and I love to hear how the recipe worked out for you! Thank you so much 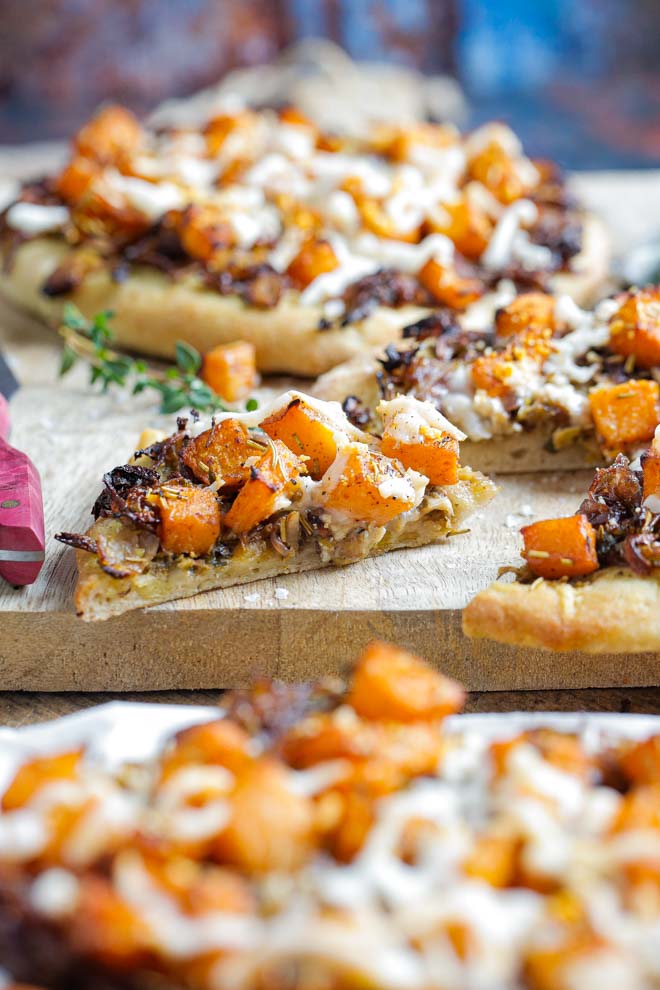