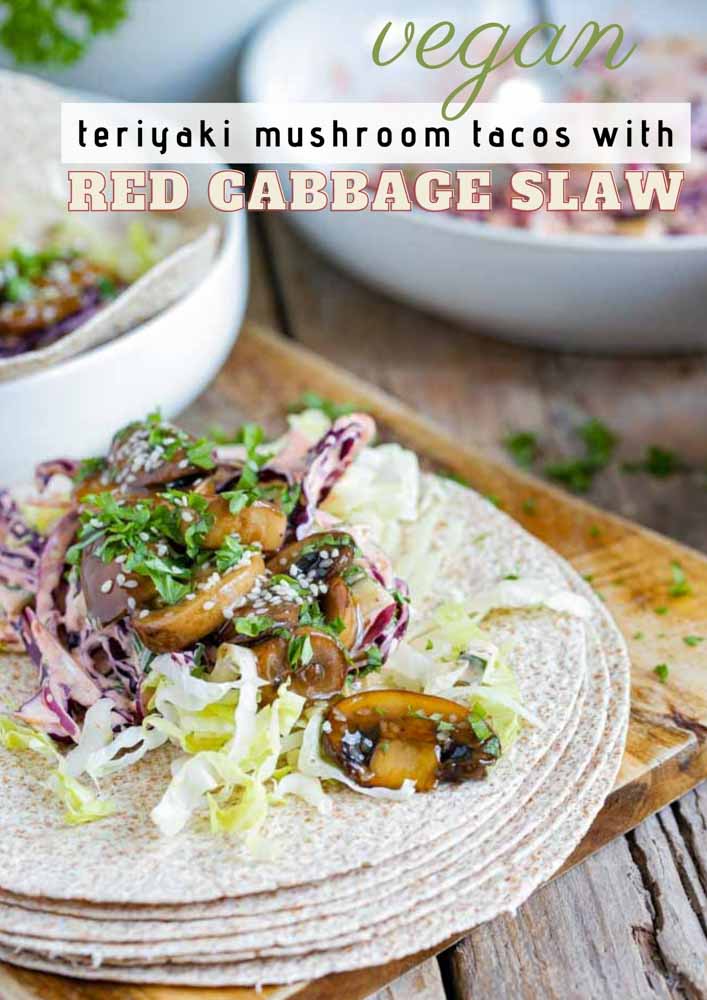 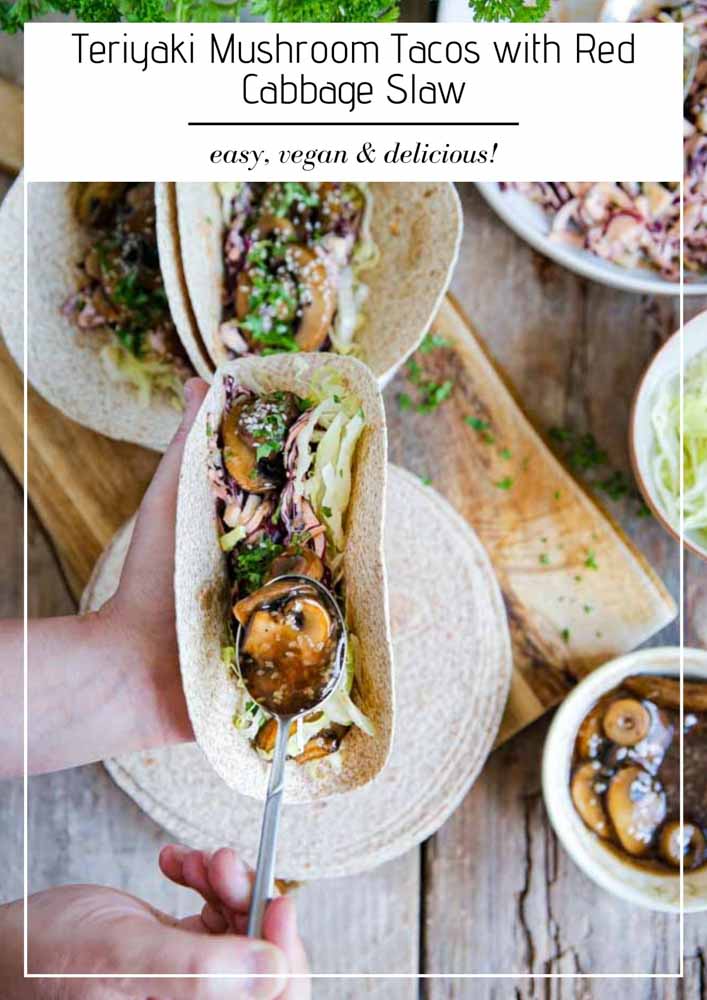 Sticky, smokey and all the Asian teriyaki flavours are piled into these mushroom tacos with a base of creamy vegan red cabbage slaw. Delicious!

Why limit tacos to just Tuesday?  Any night (or day) of the week should be for tacos!  Do you love leftovers?  Phil and I eat a lot of tortilla wraps.  We call them fridge forage wraps and involves most of the food being brought out of the fridge and stuffed into soft tortilla wraps.  But for a change – and because I LOVE teriyaki anything – I thought I’d make an actual recipe rather than just a mash of whatever we’ve got left.  Although technically these were borne out of having some mushrooms in the fridge getting close to their best before date.  So teriyaki mushrooms it was. 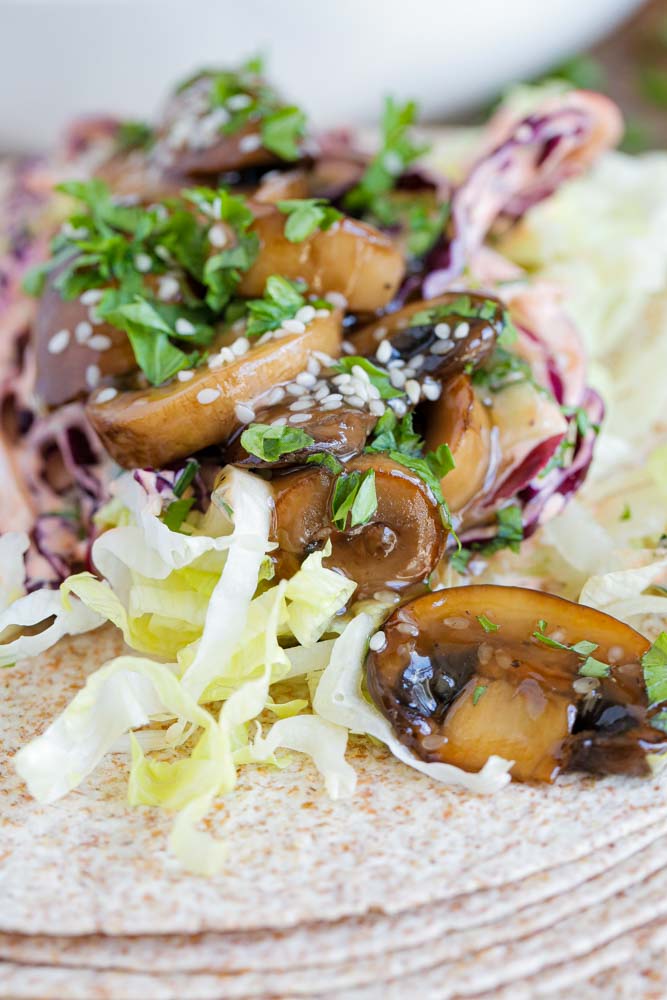 I also happen to love coleslaw and make way too much of it to be good for me.  It’s another thing that you can put all sorts into.  My mum used to make it with apple and carrot.  I’ve tried slaw with just a vinegar, lemon juice and oil dressing.  And while it was really rather yum, it just wasn’t coleslaw to me.  Not like this creamy Winter Slaw.  With crunchy nuts and soft, jewel like sultanas.

Of course you don’t have to use a slaw in the bottom of your teriyaki mushroom tacos.  But I thoroughly recommend it.  Too often we shove any old thing in a tortilla shell.  But sometimes it’s also good to have a plan.  And that plan should include creamy red cabbage slaw in complete contrast to the sticky, little bit boozy, slightly garlicy mushrooms that sit atop it.  All wrapped up in a soft tortilla.  Heaven. 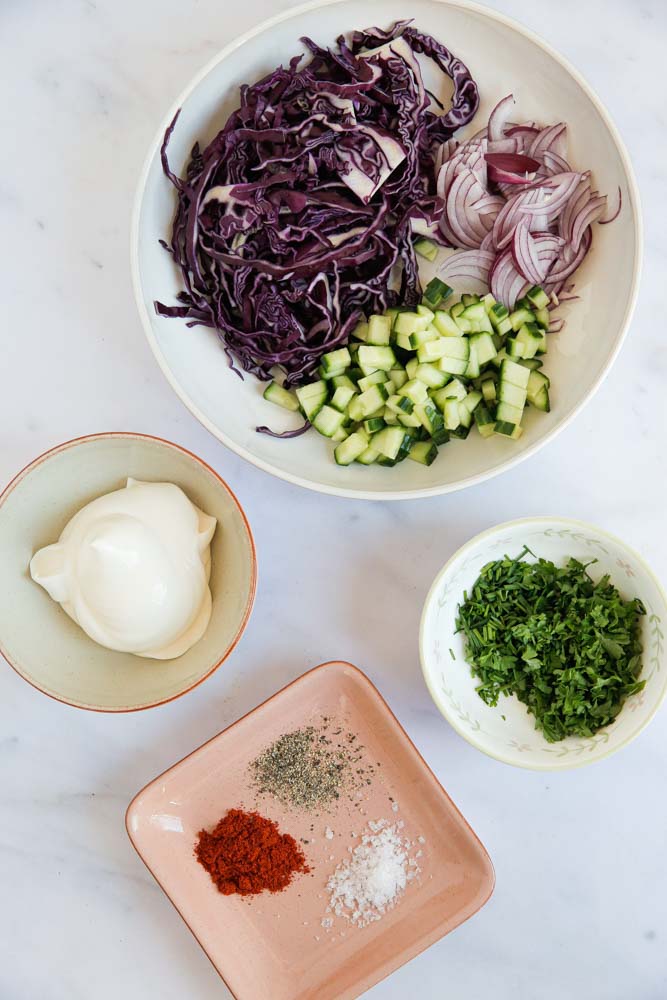 How to make these creamy, dreamy, sticky, spicy mushroom tacos:

Start with the slaw.  I personally prefer day old coleslaw.  The flavours have all that extra time to marry together in the fridge.  But honestly, I’ll also shovel it into my mouth while I’m making it.  Homemade coleslaw is SO much better than anything shop bought.  Of course vegan slaw being available in shops is also a fairly recent thing.  It’s not bad and I’ll buy it if I’m feeling extra lazy but it’s always a little too vinegary for me.  Just shred or chop your vegetables, add some chopped fresh parsley, smoked paprika and dollop in the mayo.  I also taste and add extra salt and pepper as needed. 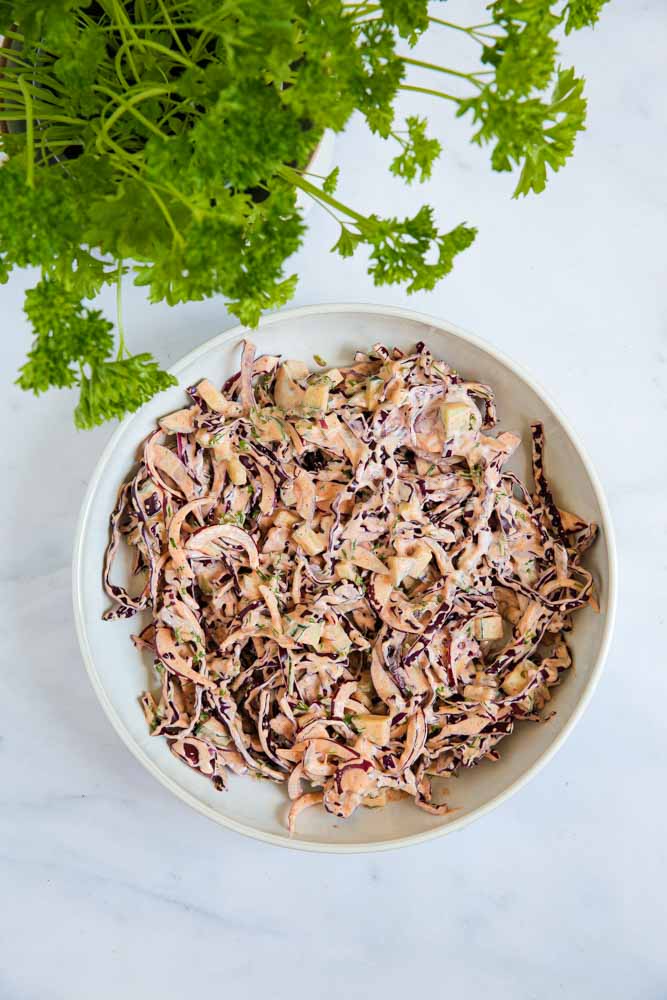 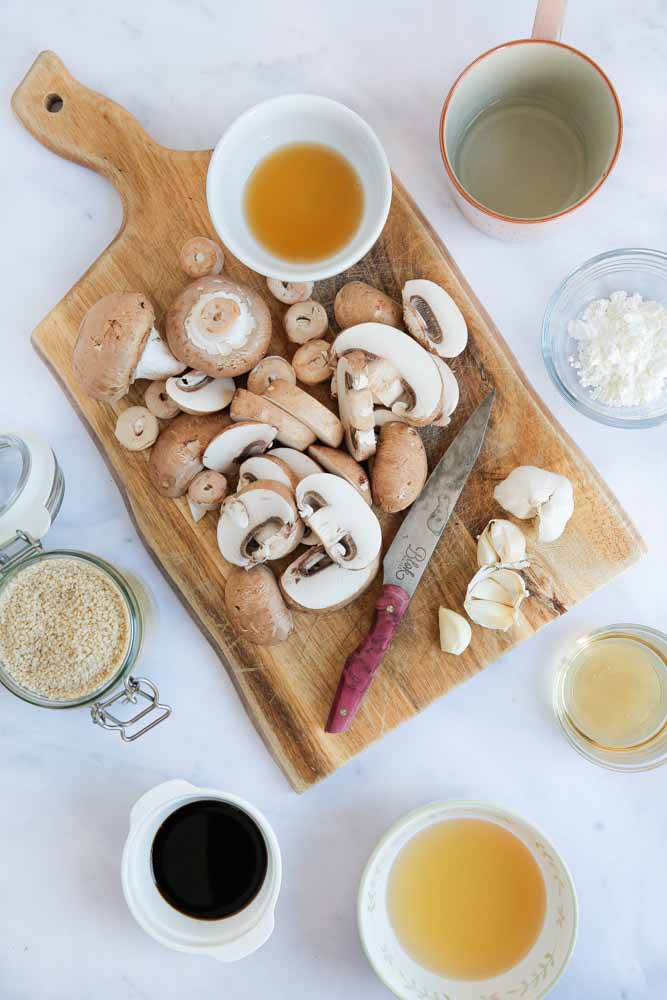 Next is the teriyaki sauce.  It’s SO easy.  Simply mince the garlic and put into a saucepan with the liquid aminos (or soy sauce), bourbon (you can also use brandy or sherry), maple syrup, rice vinegar and water.  Gently bubble for a few minutes to take the raw edge off the garlic and the bourbon.  Whisk the cornflour with a little more water to a runny paste then whisk that into the saucepan.  Bubble, while whisking, until you have a thick, sticky sauce.  The sauce will look cloudy when you add the cornflour but as you cook it, it will become clear.

Saute the mushrooms in a HOT pan.  Use a little sesame oil and don’t stir too much.  Allow them to caramelise.  I’ve used chestnut mushrooms but you could mix it up with button mushrooms and oyster mushrooms.

Time to load up your tacos!  We love the soft tortillas – you can warm them in the microwave or in the oven wrapped in some foil with a splash of water or just have them cold.  Layer in some shredded lettuce, followed by the red cabbage slaw then top with the warm teriyaki mushrooms. 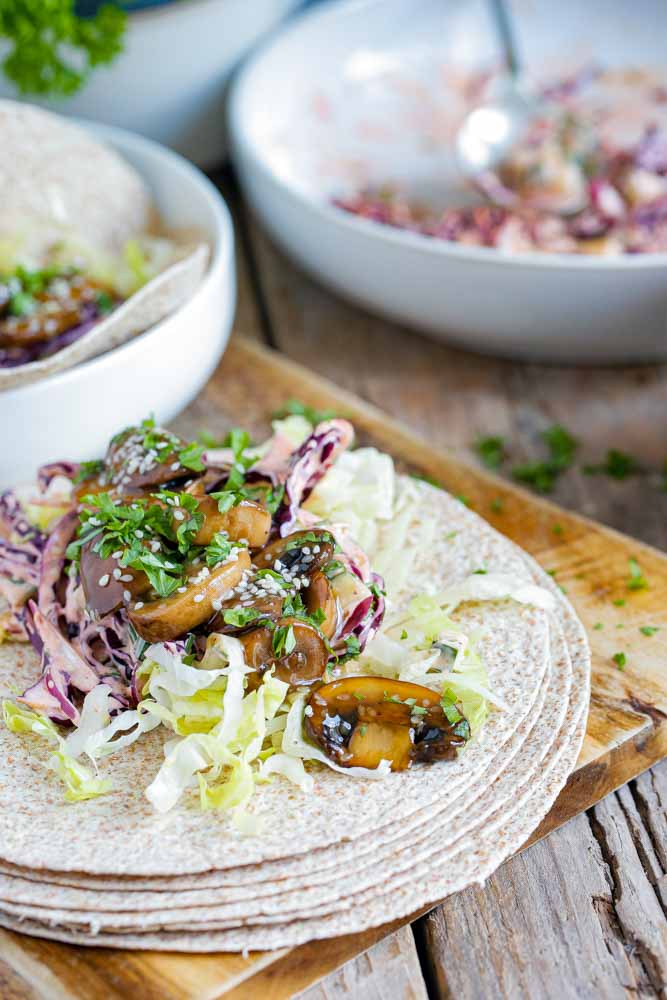 Fold up and enjoy!  These mushroom tacos are a little bit messy, there may be some sauce that dribbles down your chin.  I have boobs that invariably catch all that stuff.  But I assure you, they’re SO worth it! 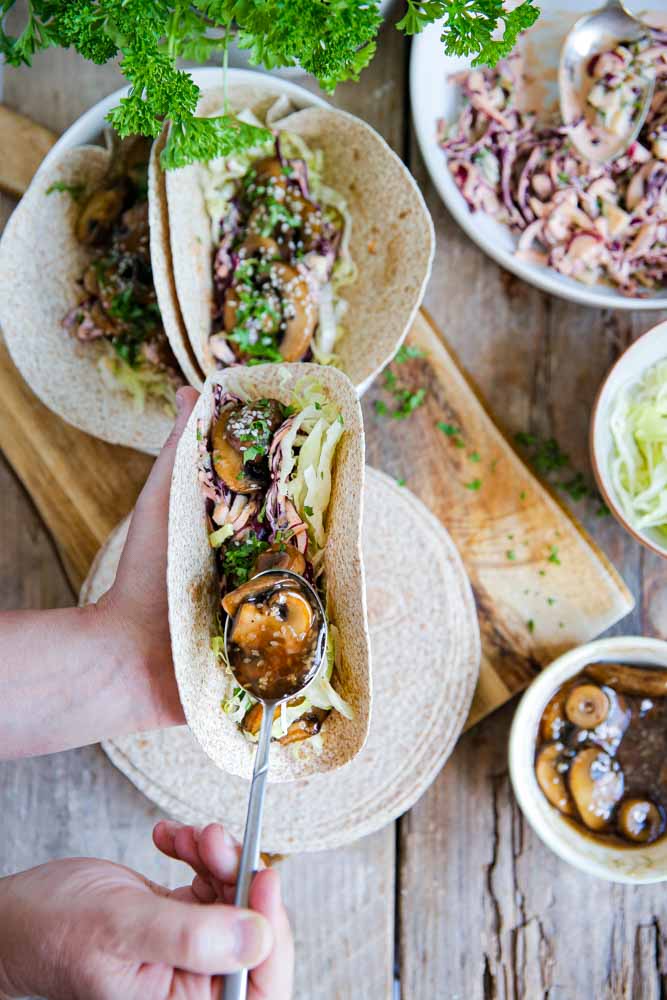 I’d also love to hear from you if you make these Teriyaki Mushroom Tacos! Just leave a comment as it’s so helpful and I love to hear how the recipe worked out for you! Thank you so much! 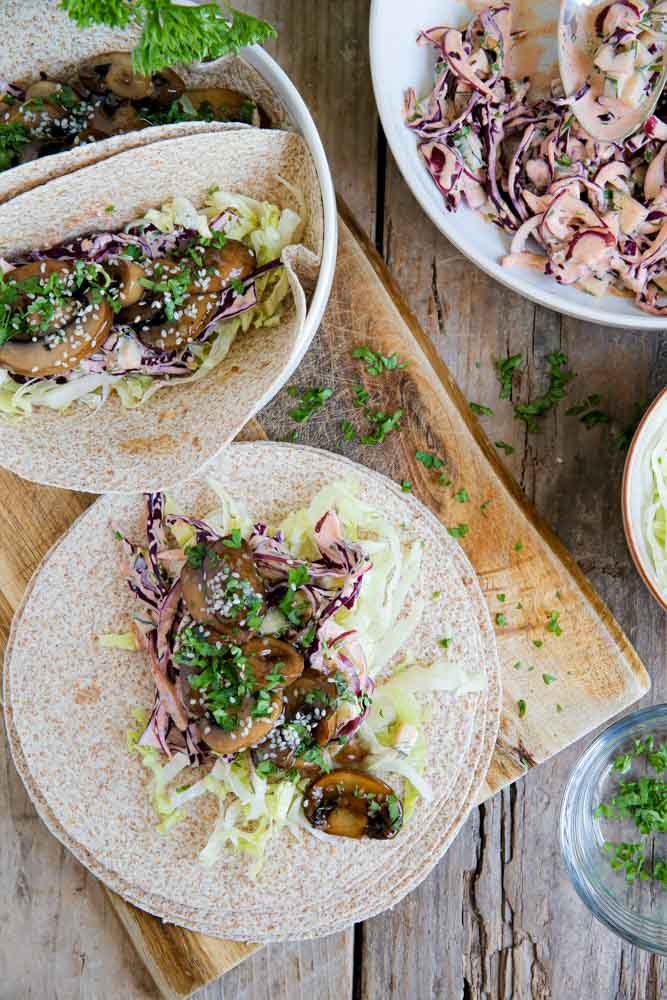