Super easy recipe for fried donuts with a crisp, sugary outside and soft, fluffy centre and a divinely sweet grapefruit curd filling!

Fried donuts are my kryptonite.  My hunger for those sticky, sweet bites of sugary heaven knows NO bounds.  I also know they’re about as unhealthy as they can get – being deep fried and drenched in sugar after all.

But sometimes (and I mean a very rarely sometimes because I will literally eat the lot) I embrace my sweet cravings and make fried donuts. 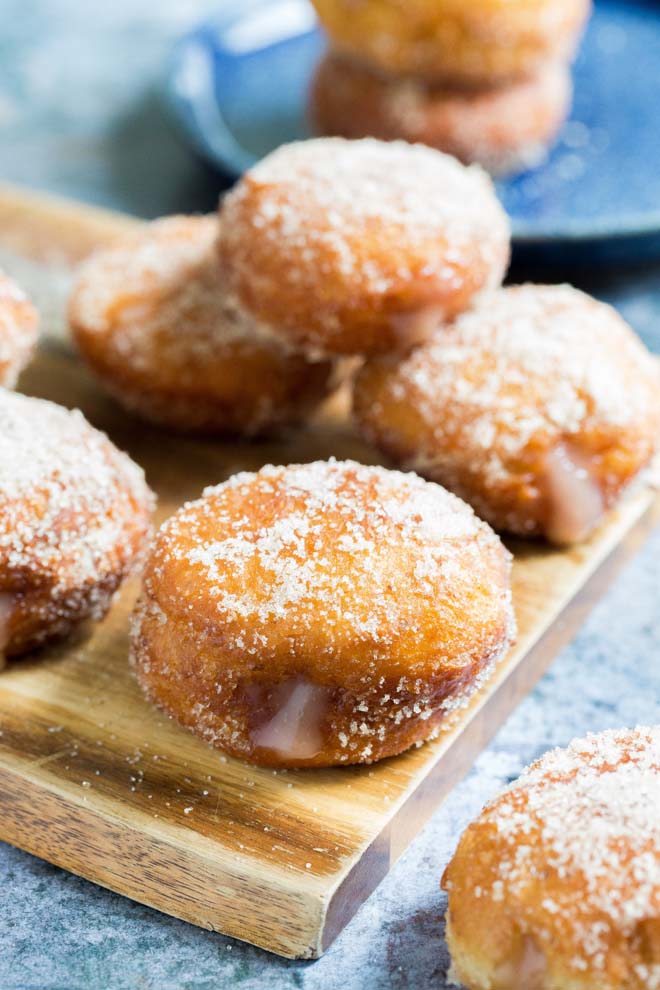 Baked donuts have their place and are even easier to make, giving you a quick donut fix when needed

So I’ve tried to make this fried donut recipe as simple as possible – even the grapefruit curd.  Because I SO want you to embrace your sugary side with me.  We can go back to being raw and healthy tomorrow.  Today is the day for fried donuts. 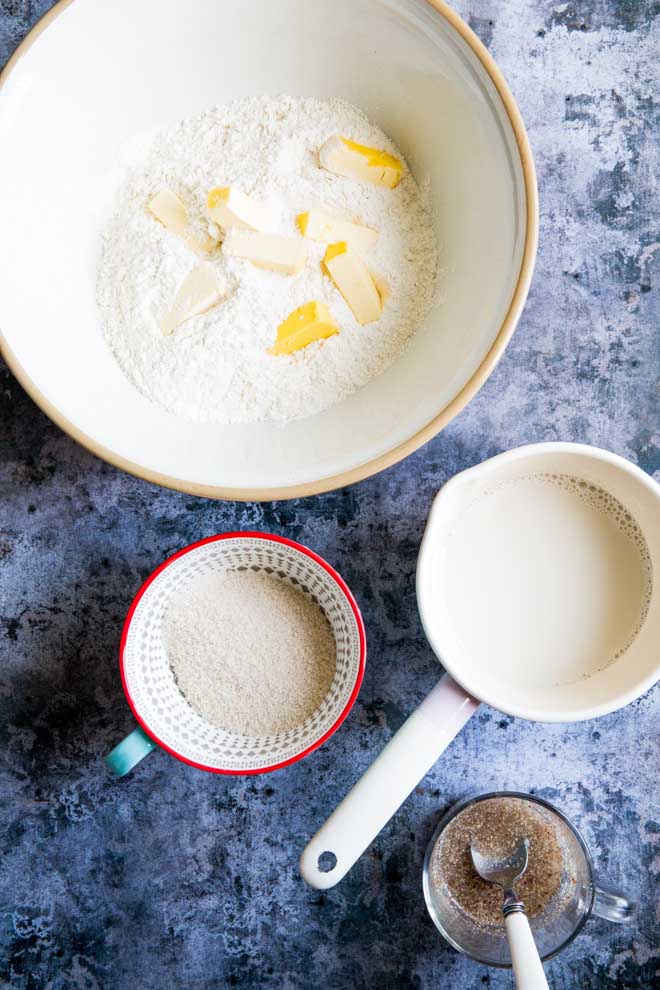 How to make fried donuts

The best type of fried donut is the yeast risen kind.  Don’t panic, it’s not at all finicky and because we’re using plain flour there isn’t hours of strenuous kneading.  For this really easy donut recipe we start by blending the fat into the flour – this can be done by hand or in a stand mixer.  Then warm the liquid to blood temperature – this means that when you put your finger in it you can’t tell if it’s hot or cold!  Too hot and you’ll risk killing the yeast, too cold and the dough will take longer to prove.  If you’re concerned, err on the side of cooler rather than warmer.

Once your liquid is warmed, whisk in the yeast and leave it to froth for just a few minutes.  Then mix the wet with the dry, knead gently and lightly.  Just enough to bring it together to form a dough.  Put into a clean, oiled bowl.  This helps stop the dough sticking to the bowl – which equals more donuts and is the real reason 😉

It’s a very soft dough and only needs some gentle handling.  No furious kneading like normal bread.  This gives the finished donuts such a wonderfully soft centre in the middle of that divinely crisp, sweet shell.

The dough is then left to prove in a warm place for around an hour or until doubled in size.  If your oven has a bread proving setting use this as it will probably take less time – just 30-40 minutes. 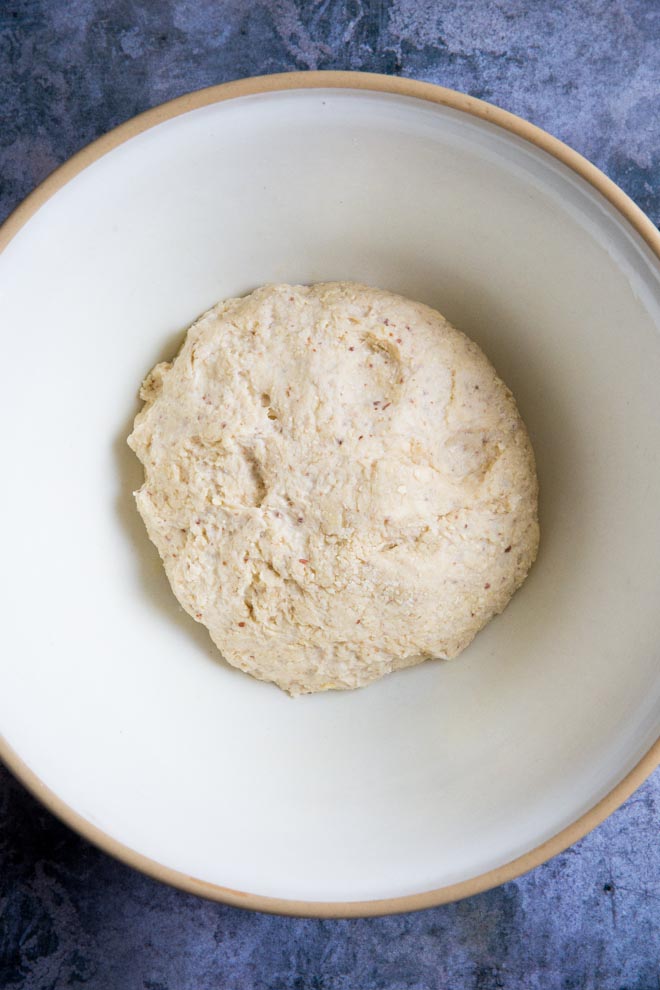 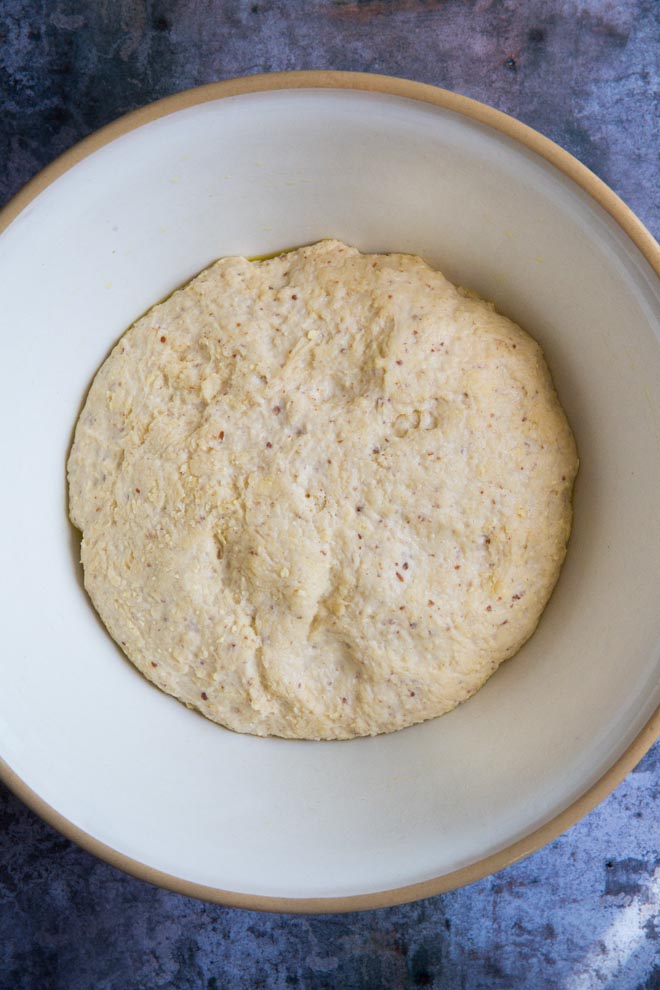 While that’s proving make the vegan curd so that it has time to cool and set.

This is also really easy – it’s a bit like making custard with custard powder.  And is where Foodie Flavours really comes into its own.  They are little bottles of natural food essences, perfect for adding a real kick of flavour without upsetting the balance of a recipe by having to add a lot of something to get a good amount of flavour. 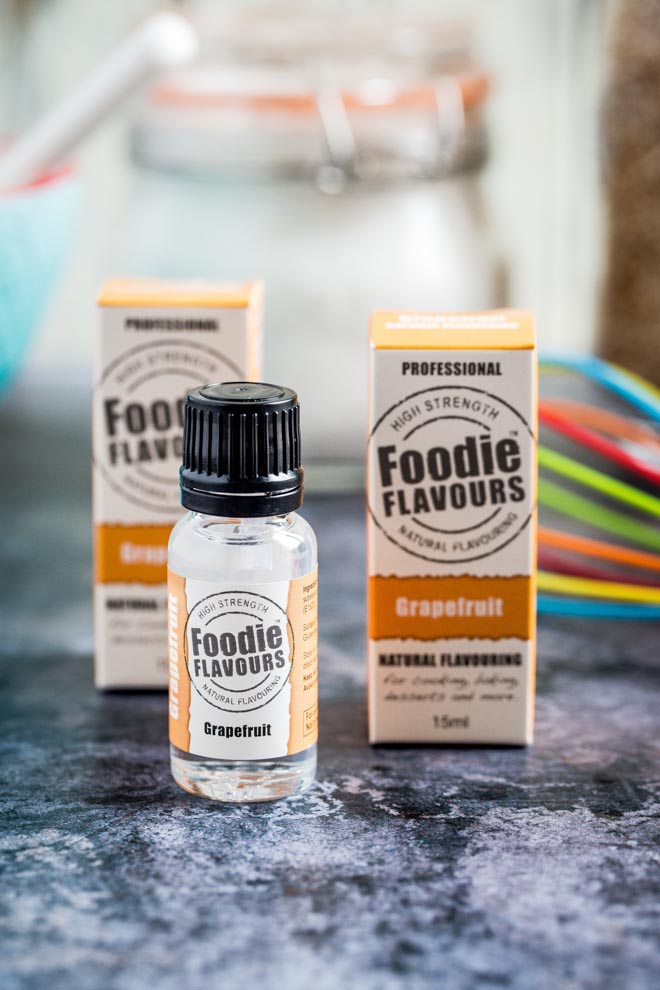 Just mix a little of the plant milk with the cornflour and bring the rest of the milk to boil with the sugar.  Whisk the cornflour paste into the hot milk and and whisk until it starts to thicken.  Pour into a container and lay a piece of parchment or cling film so that it rests on top of the curd – this helps prevent a skin forming.  Pop in the fridge until you’re ready to use. 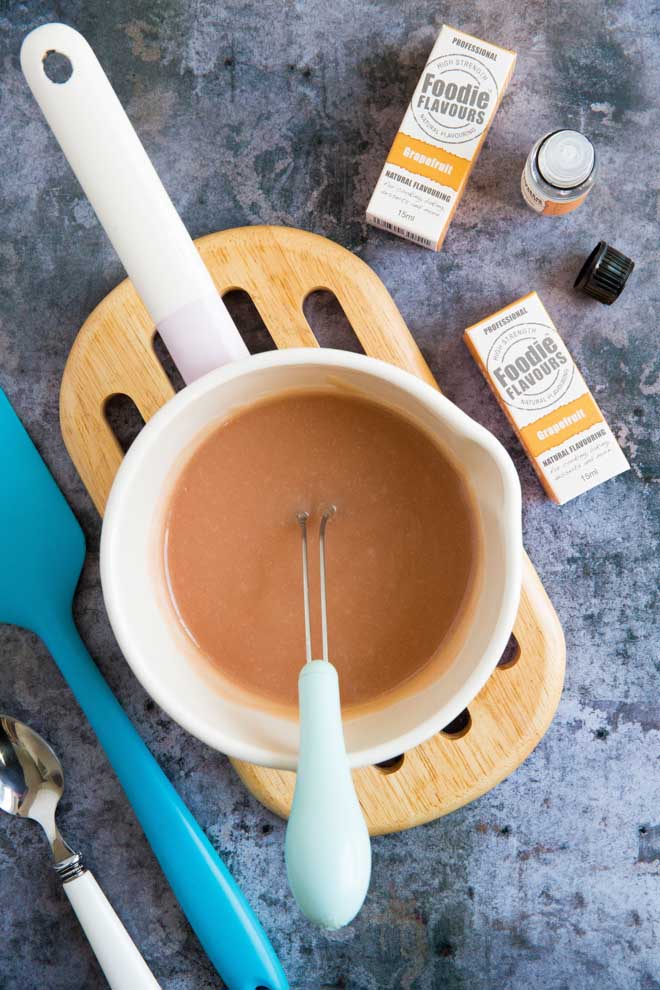 Once your dough has proven, gently roll out on a well floured surface and use a cutter to cut circles.  Lay onto a tray, spacing fairly well apart as they will grow as they prove. 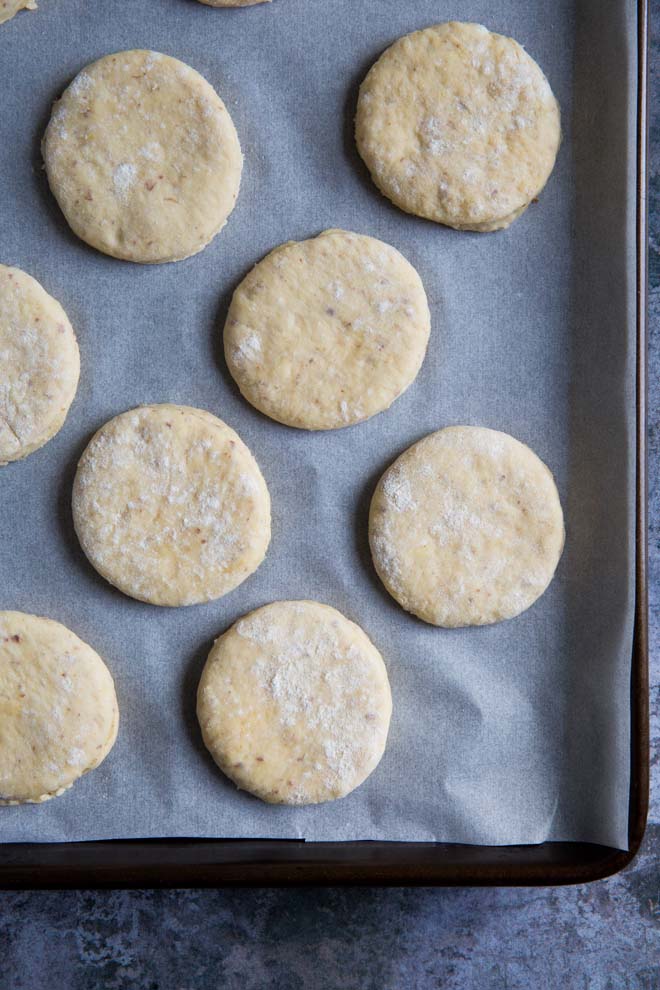 Again, leave for around an hour until well risen then deep fry (I used a wok for this!) before draining and coating in sugar.  THE BEST BIT 😉  And they’re perfectly edible just like this but adding the curd takes them to a whole new level of I need some kind of helpline to stop me eating these good.

Phil was cleaning the car as I started frying them and he suddenly appeared, salivating and asking why the house smelt like a fairground!  This donut recipe makes a lot (18-20) so you could halve it or spread the donut love because everyone deserves a donut in their life from time to time right? 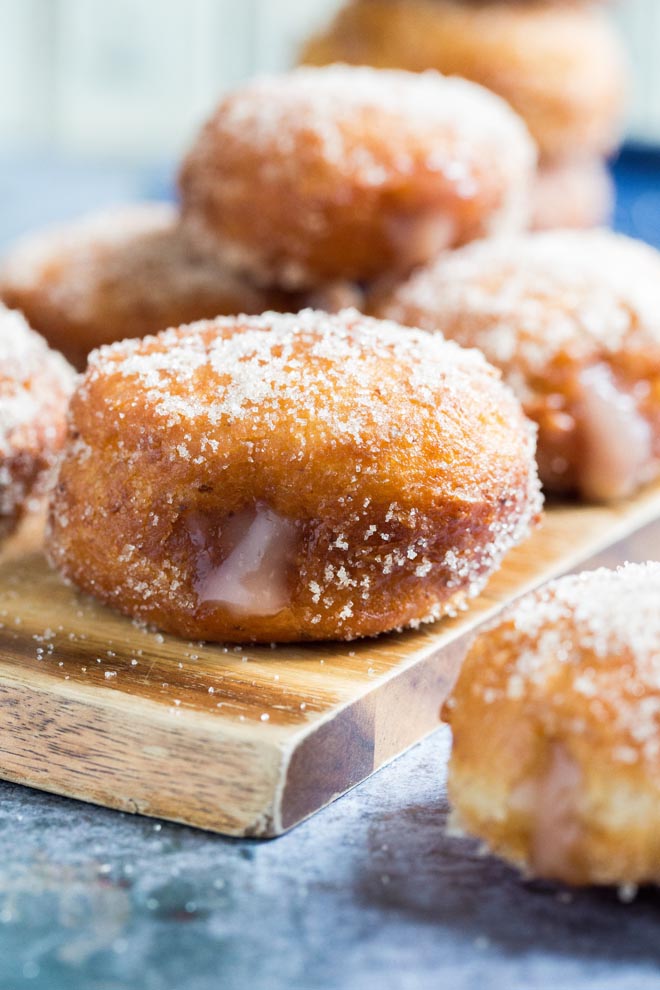 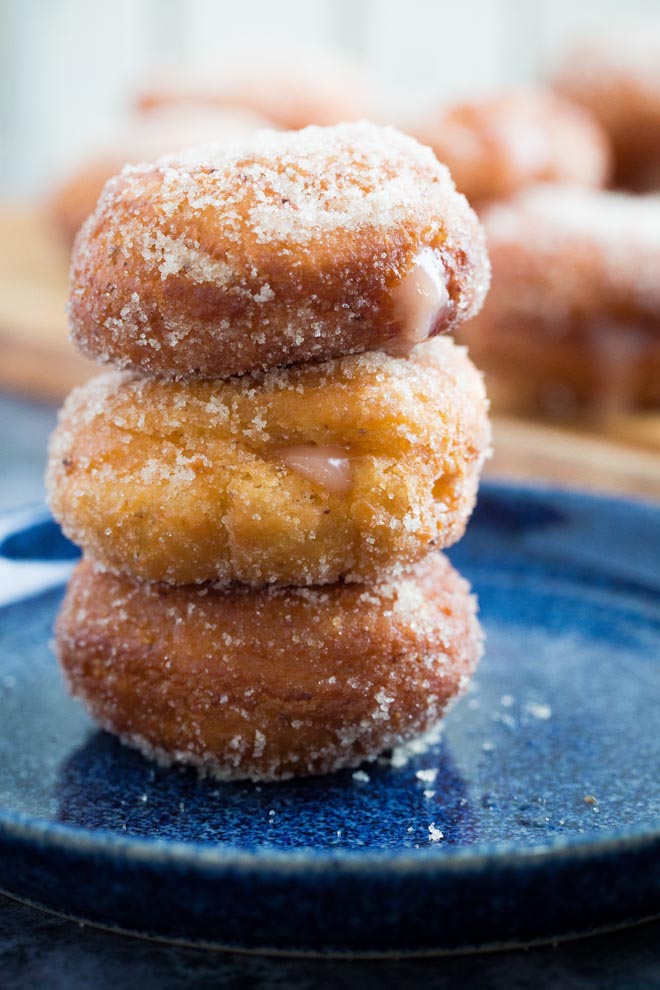