We have all the flavours of Christmas in this soft yeast dough – warming spices, chocolate nut butter and sweet sticky orange.  These spiced chocolate orange twists are deliciously indulgent!

I’m also going to apologise now for this photo heavy post.  The method of cutting and twisting the dough is not difficult to do but it is a little difficult to explain in just words.

These spiced chocolate orange twists also have a couple of incarnations.  The first time I made them I used the divine Pip and Nut Limited Edition Chocolate Orange Almond Butter.  OMG.  This stuff. 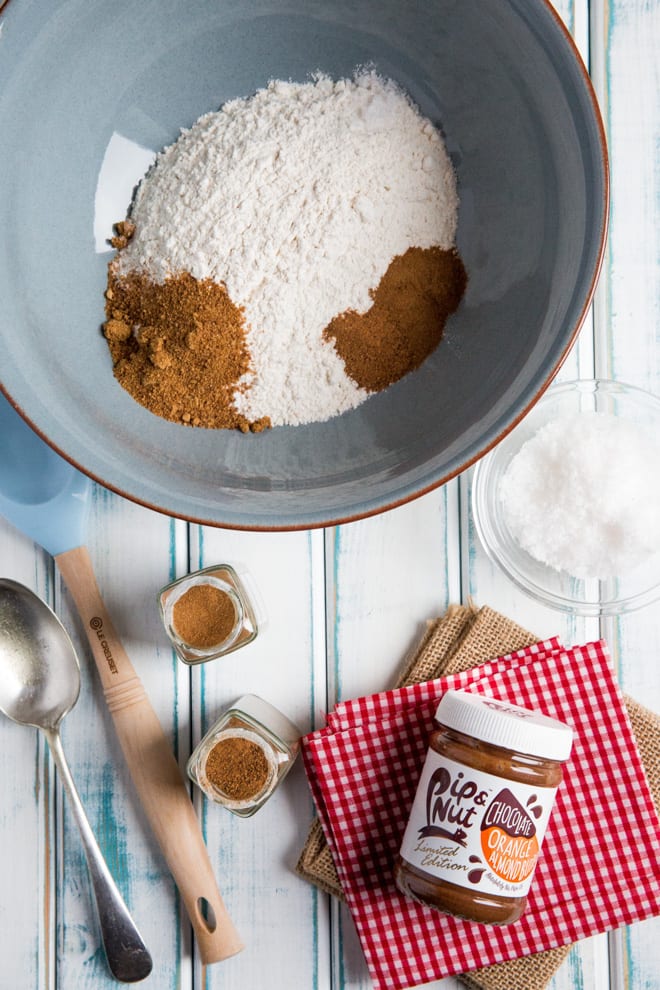 It’s like THE best chocolate orange spread you’ve ever tasted.   The only problem is because it’s so flipping tasty I’ve used it all.  Phooey.  I did manage to eke it out enough for some Chocolate Orange Granola as well though!

For extra sticky orange-ness I’ve used candied orange peel – which honestly isn’t anywhere near as difficult as it sounds and can be made while your dough is on its first prove. 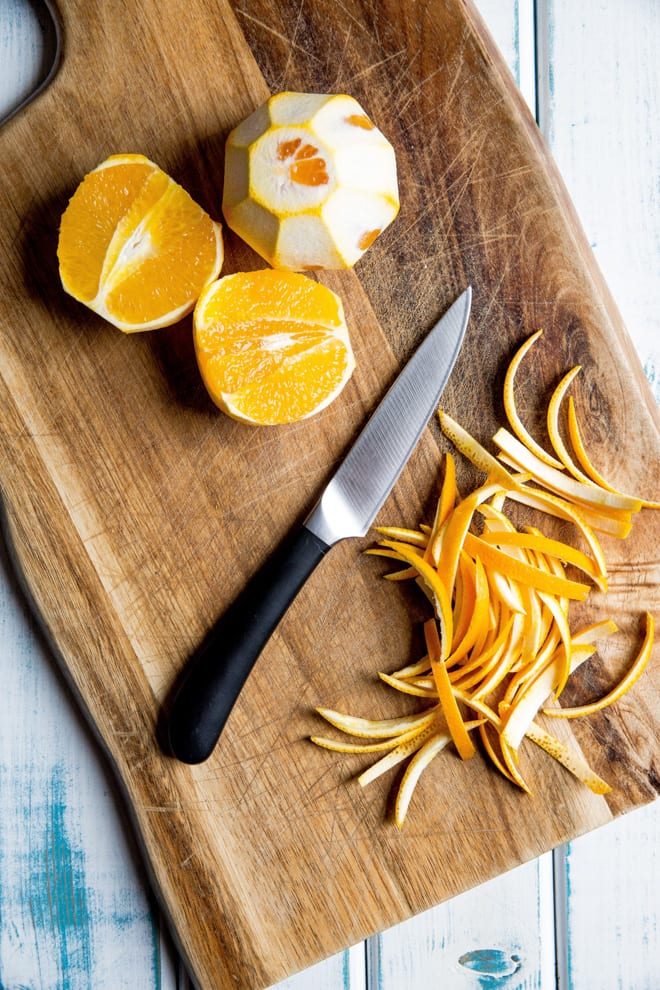 This was also a Phil tested recipe!  He always takes care of Pancake Sunday and occasionally adds in a bit of weekend baking.  So he made a his and hers set of twists – one using the scrapings of the jar of Pip and Nut for me and one using Grenade Carb Killa Jaffa Quake for him!  It’s a protein spread a bit like Nutella but comes in a range of flavours. 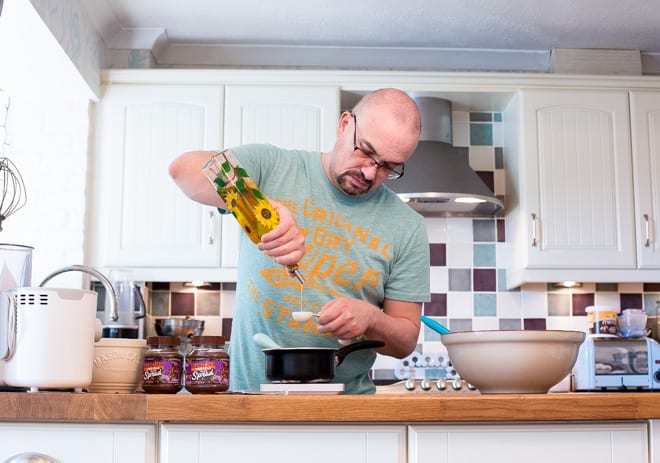 Ok .. on to explaining the dough twisting.  It’s simple but effective and can be used for sweet and savoury – I’ve made a similar bread using sage pesto for the ‘filling’.

Once you’ve proved the dough once, simply ‘knock back’, divide in half and roll one piece into a large rectangle.  Knocking the dough back gives a better final crumb and helps eliminate any giant air pockets.  The dough is stretchy and elastic so it’s not like rolling pastry – it WILL want to shrink back on itself.  Just keep rolling outwards, stretching a little with your hands as well if you feel comfortable doing that, until it’s large enough.  I got mine to around 9 x 14 inches (24 x 35 cm) 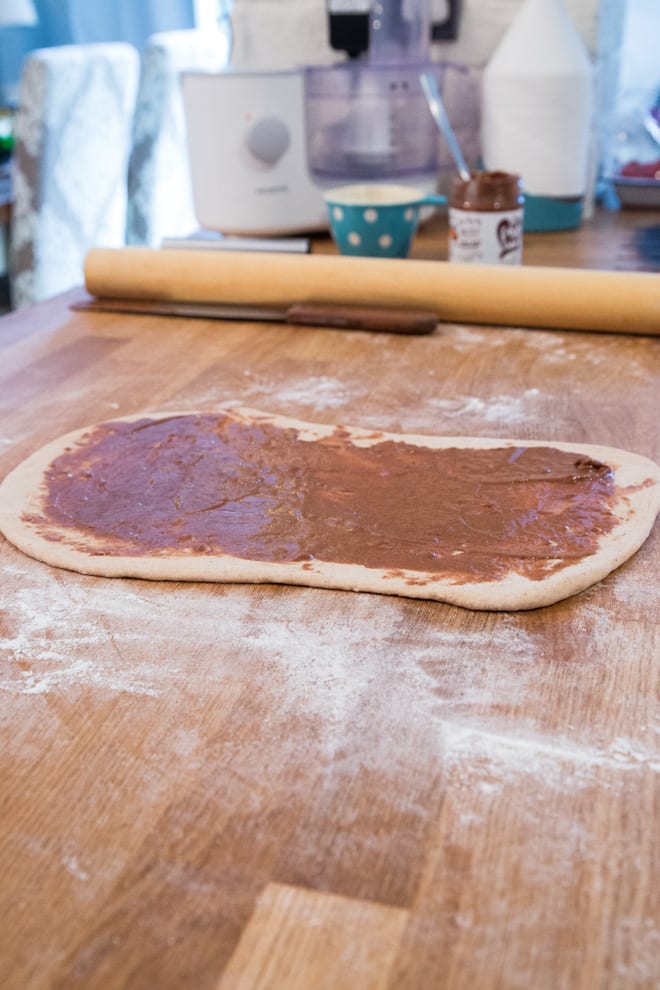 This is where the sticky fun begins!  Spread half the nut butter over the dough, going out almost to the edges.  Sprinkle half the candied orange over the top of the nut butter then roll up from the short end like you would a swiss roll cake. 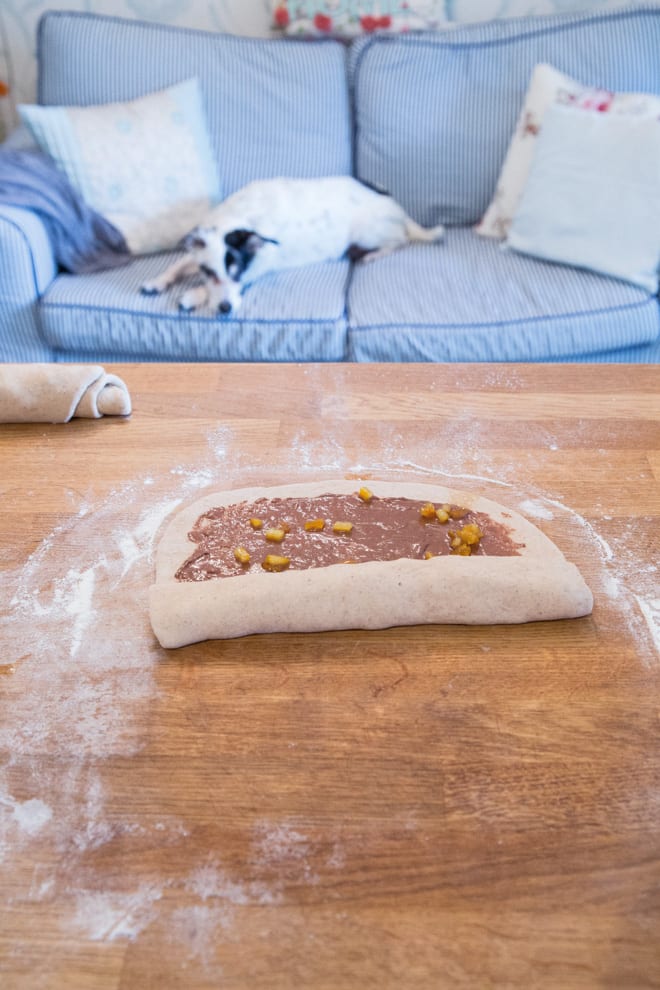 Once you have a tube like roll, put it to once side and repeat with the other piece of dough – rolling out, spreading, sprinkling, rolling up.  And voila, two dough swiss roll thingies!!

Take one and place it lengthways away from you.  Take a SHARP knife and about an inch from the top end cut down through the dough to make two ‘pigtails’ that are still attached at the top.  I make several light cuts rather than one cut through the dough at once as it’s quite oozy and I find it easier to cut in several stages. 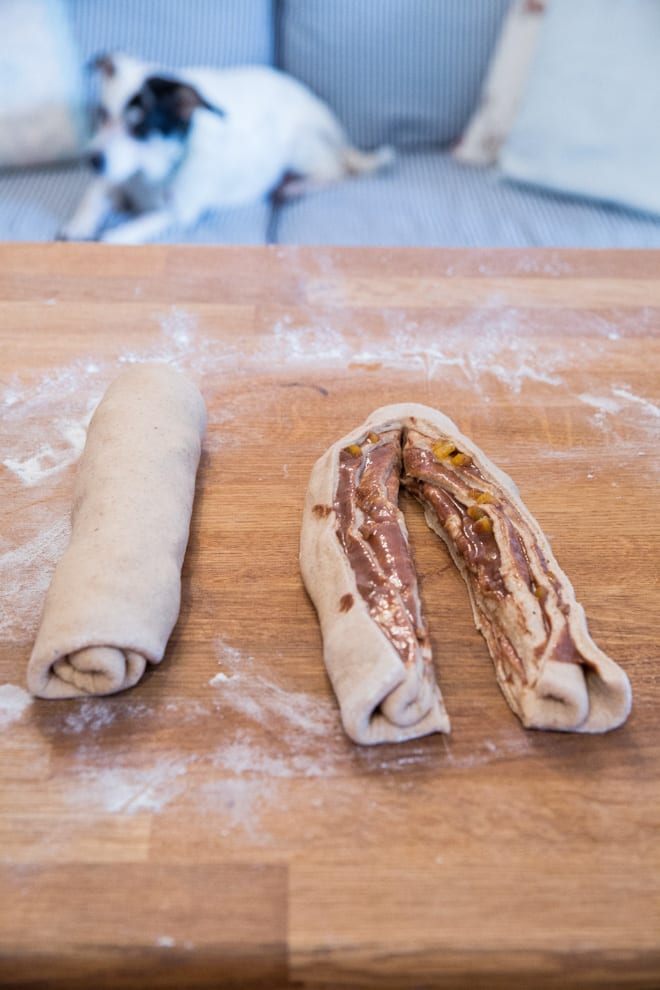 Then you take one of the two pieces and lay over the other piece, repeating this a couple of times until you have a twist.  Press the two dough pieces together at the bottom and lay onto a baking tray.  Do the same with the other swiss roll of dough. 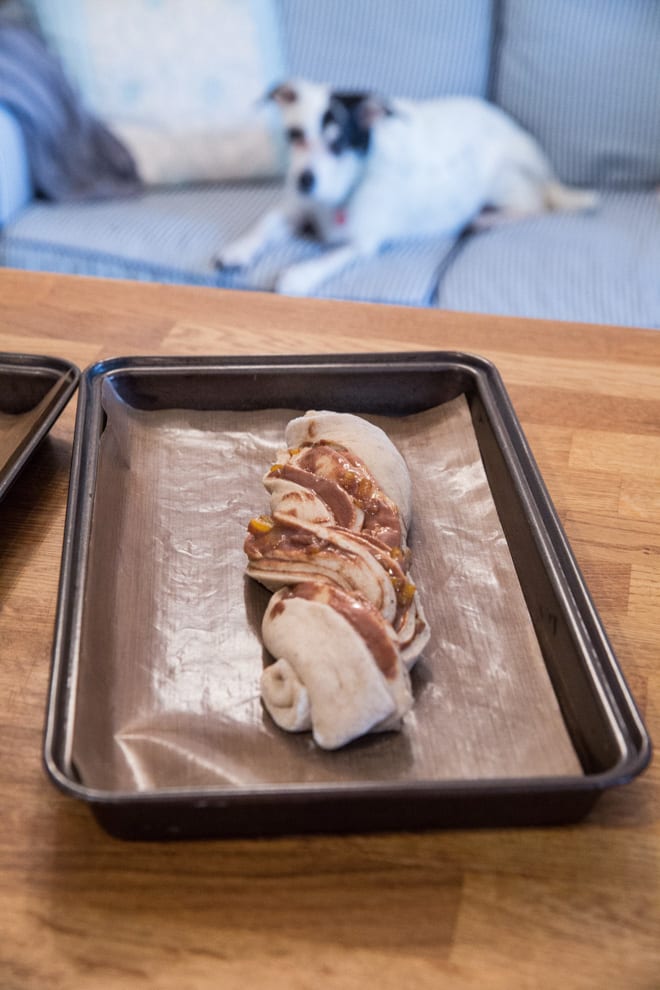 From then it’s just another prove before baking and your house smelling of the most divine chocolate orange nuttyness!  These spiced chocolate orange twists are an absolute favourite in our house now and open to SO many other flavour combination possibilities!! 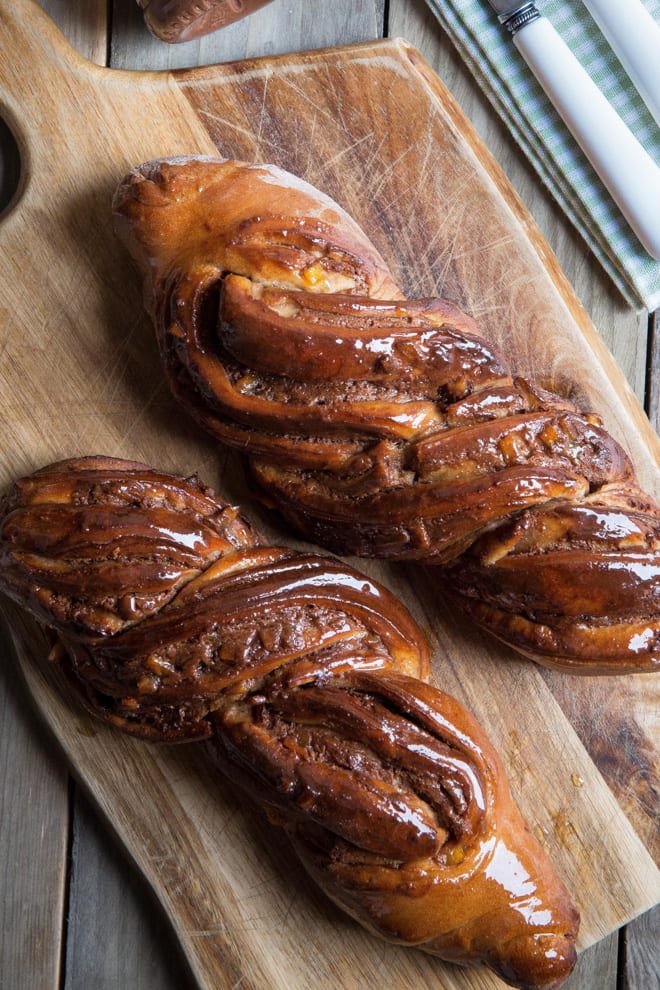 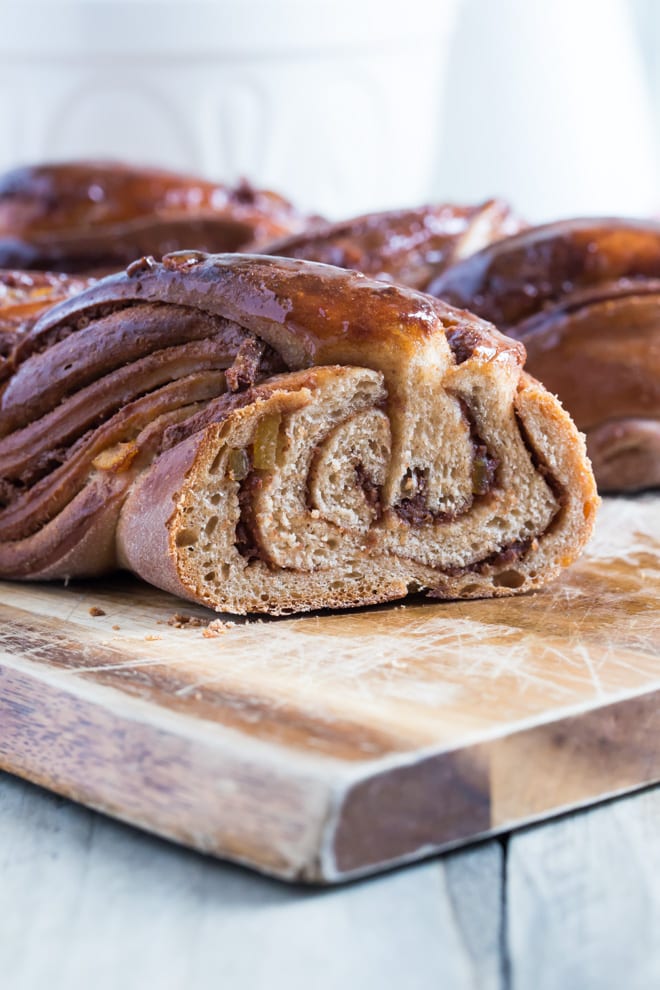