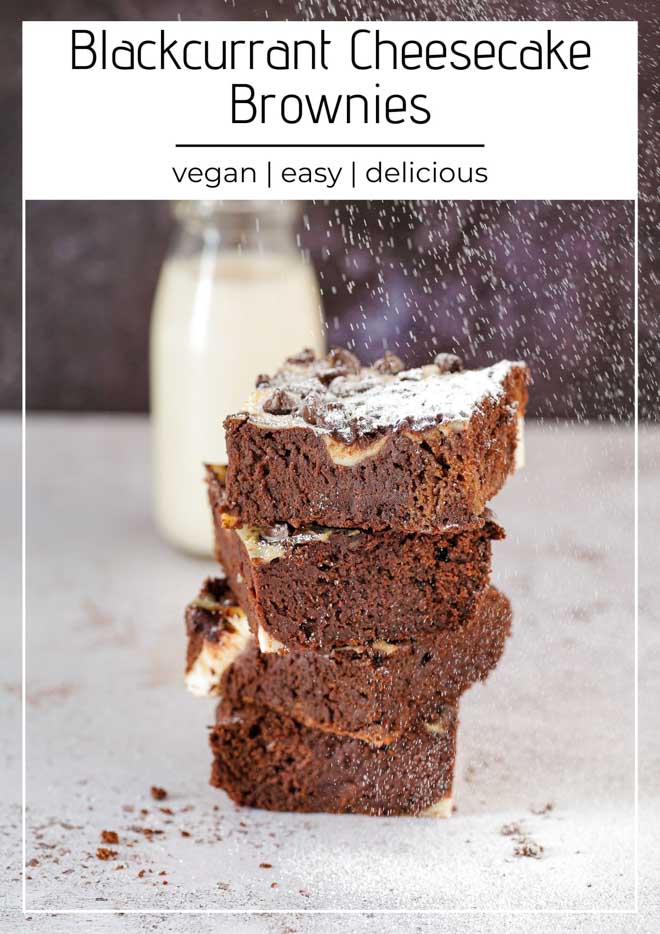 I’d never tried cheesecake brownies till I made these.  It felt like a gaping hole in my eating repertoire.  And now I HAVE tried them I feel like I’ve been missing out all these years.  It’s not even that I was a bit of a brownie purist.  The only criteria for good brownie is that it’s extremely chocolatey and extremely fudgy.  I’ve been known to add fresh fruit, nuts, protein powder but never to the detriment of the chocolate fudgyness. 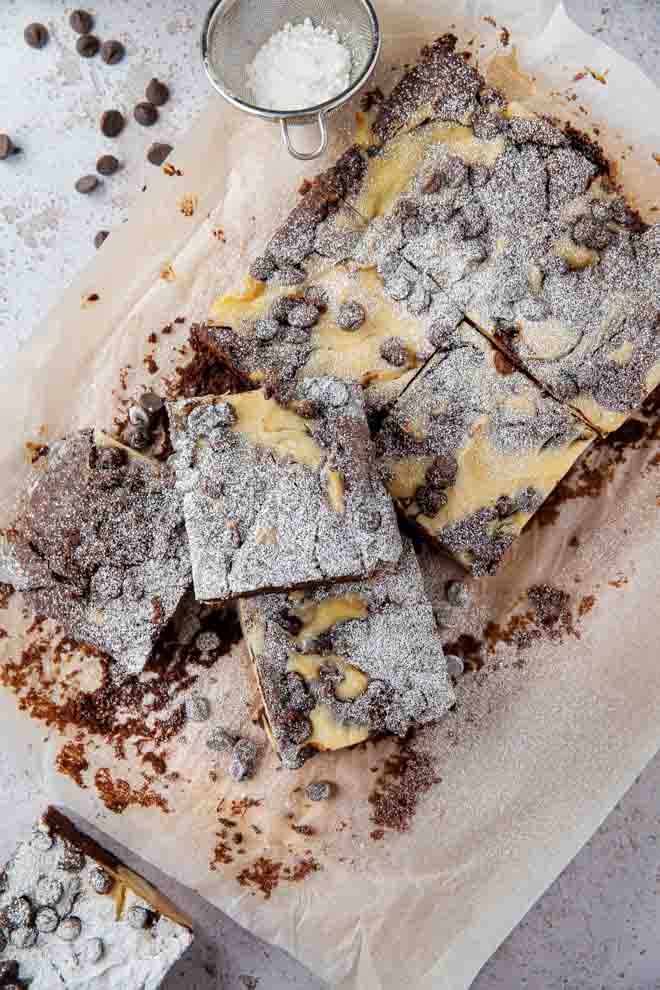 And as always, using Foodie Flavours natural flavourings means you can impart a great deal of flavour without altering the texture or quality of the base recipe.  I have an ever growing collection of their wonderful flavours and they do not disappoint.  I’ve used a couple for this cheesecake brownies recipe – blackcurrant in the brownie batter and cream cheese in the cheesecake mixture.  I’ve also used their fantastic Gorilla Vanilla organic extract – grown by select farmers in Uganda, the land of Mountain Gorillas and where Foodie Flavours have upcoming plans for supporting the protection of these magnificent animals. 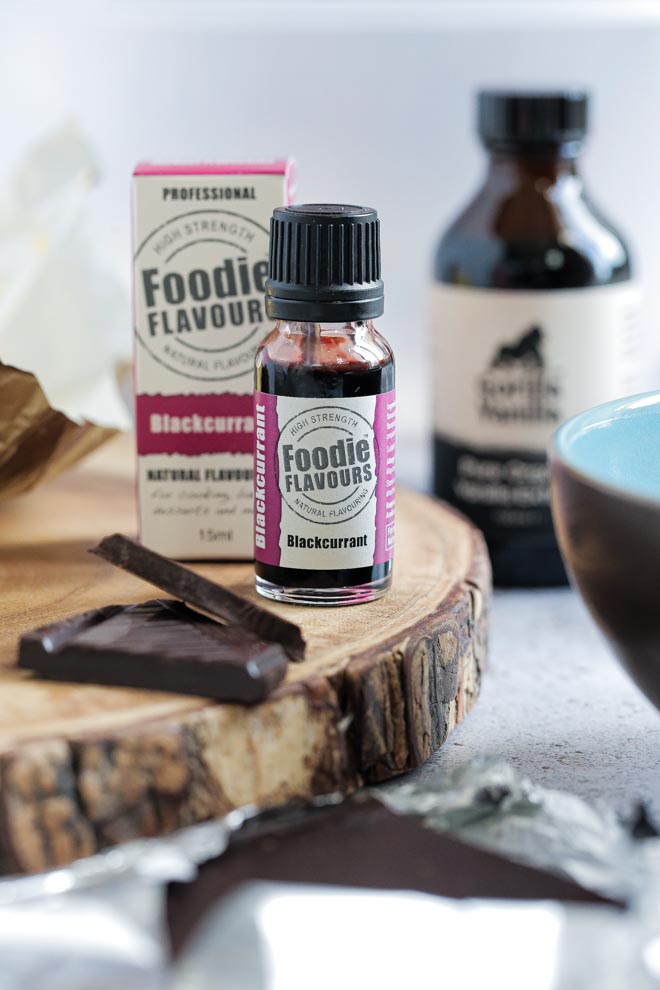 Let’s talk about the other ingredients.  If you’re going to make something as rich and downright unhealthy as a brownie you might as well use quality ingredients.  For the brownie batter we’ve got vegan butter melted with dark chocolate.  The better the quality and cocoa content of the chocolate the richer the brownie.  I would recommend nothing less than 70% cocoa.  However, too high a cocoa content can result in quite bitter chocolate.  Not too bad used in a recipe with sugar but not so pleasant to eat as just chocolate!  I’ve also used raw cacao powder for even more chocolatey flavour.  Raw cacao is quite different to cocoa powder – it’s roasted at much lower temperatures and cold pressed, giving a richer flavour.  It’s also far less processed and retains more of its nutritional value. 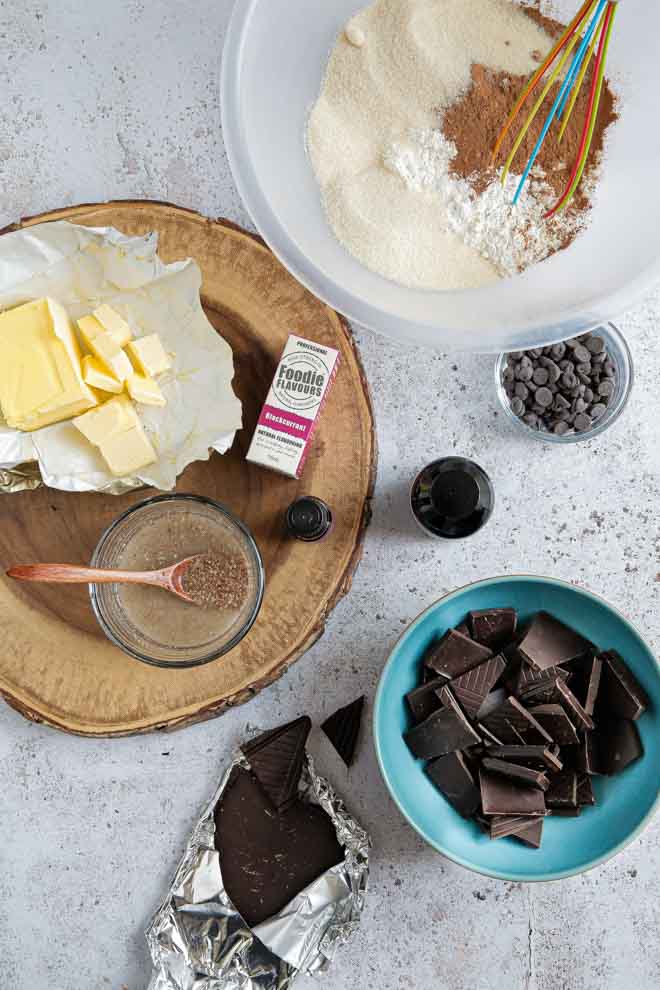 The cheesecake bit is actually made out of tofu.  Yep, tofu.  Silken tofu specifically.  This stuff is amazing – it also makes THE most perfectly silky Vegan Chocolate Pie.  Honestly, go make it.  I’m not even kidding how good it is.

How to make vegan cheesecake brownies:

Start with the cheesecake part.  Simply whizz it all together in a food processor until smooth and creamy.  Try not to eat this by the spoonful BEFORE you add it to the brownie.  Because OMG, sooo delicious. 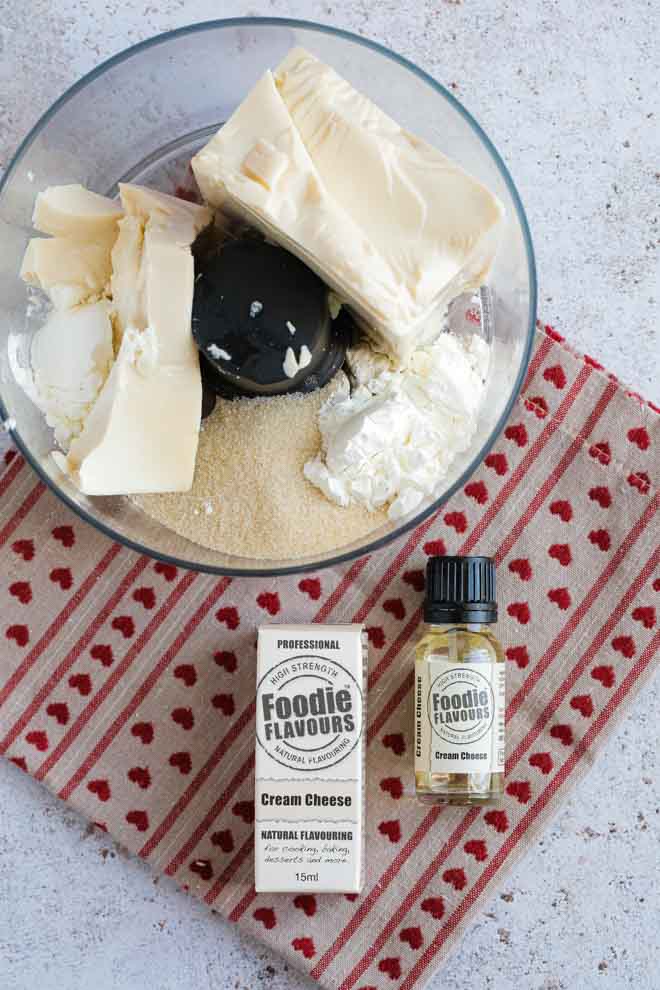 Make the flax egg.  This is simply ground flax seeds and water mixed together and set aside to thicken slightly and is a common vegan egg substitute (without the cruelty or cholesterol!)

Melt the chocolate and butter.  This can be done in the microwave or over a bain-marie (a heat proof dish set over a pan of barely simmering water)

Add all the wet ingredients to the dry ingredients.  This is the melted chocolate, flax egg, blackcurrant flavour and non-dairy milk.  Stir everything together well.

Pour the brownie batter into your prepared tin.  Smooth it out so it covers the base of the tin.

Swirl the cheesecake mixture into the brownie batter.  Use a skewer or the handle of a spoon for this.  The brownie batter is quite thick and the mixture will look like a big ‘ole mess but don’t worry, once it’s cooked it takes on a whole different (and wonderful!) texture. 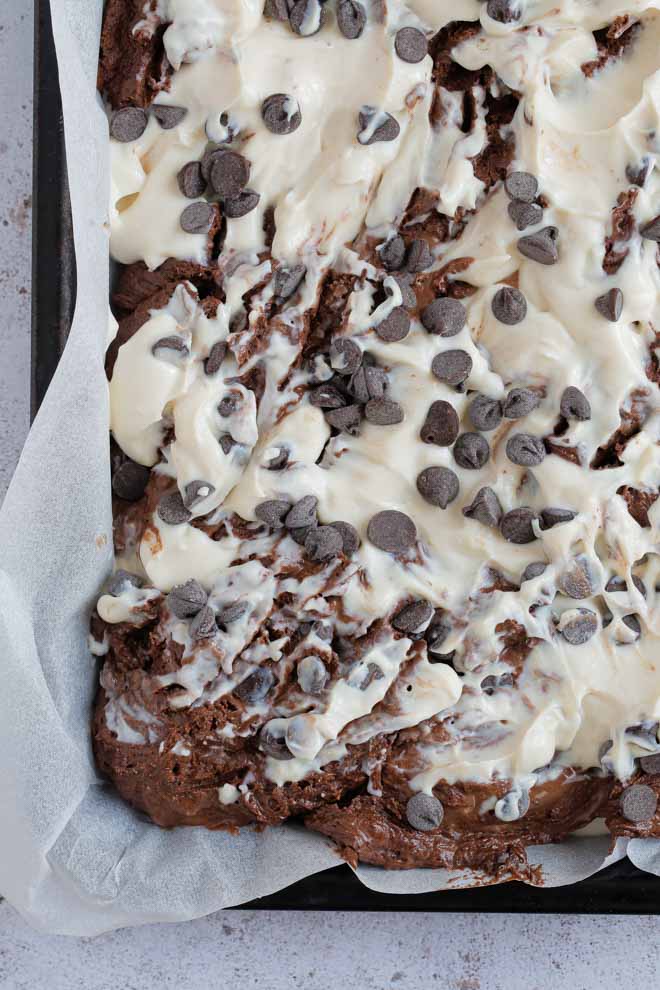 Sprinkle over the chocolate chips.  Push them in slightly, you don’t want them falling off before they get into your mouth!

Bake until just set.  This is with a bit of guidance and a judgement call on your part.  The brownie should be slightly springy to the touch if you want a fudgy finished texture.  If your prefer more cakey, cook for a little longer than I’ve recommended.

Sit back with a cuppa something warm and truly enjoy the fruits of your labour.  These cheesecake brownies really are worth taking (quite) a few moments out of your day to relish. 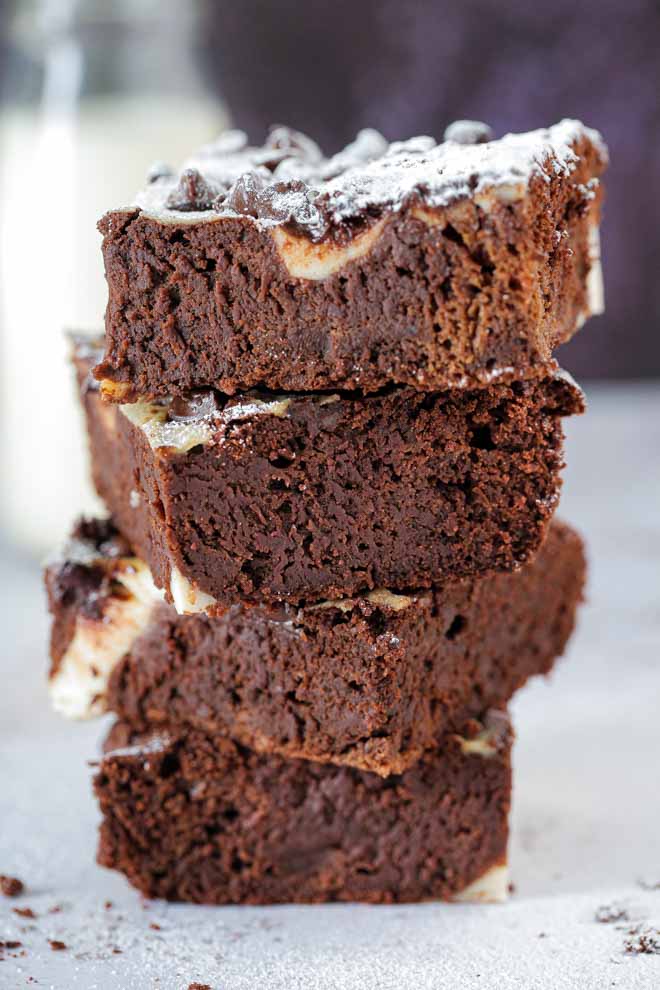 Love brownies as much as we do?  Here are some of tried and tested favourites – and they’re all vegan too!

This post contains compensated affiliate links which help support The Cook & Him so we can keep bringing you brand new vegan delights at no extra cost to you! 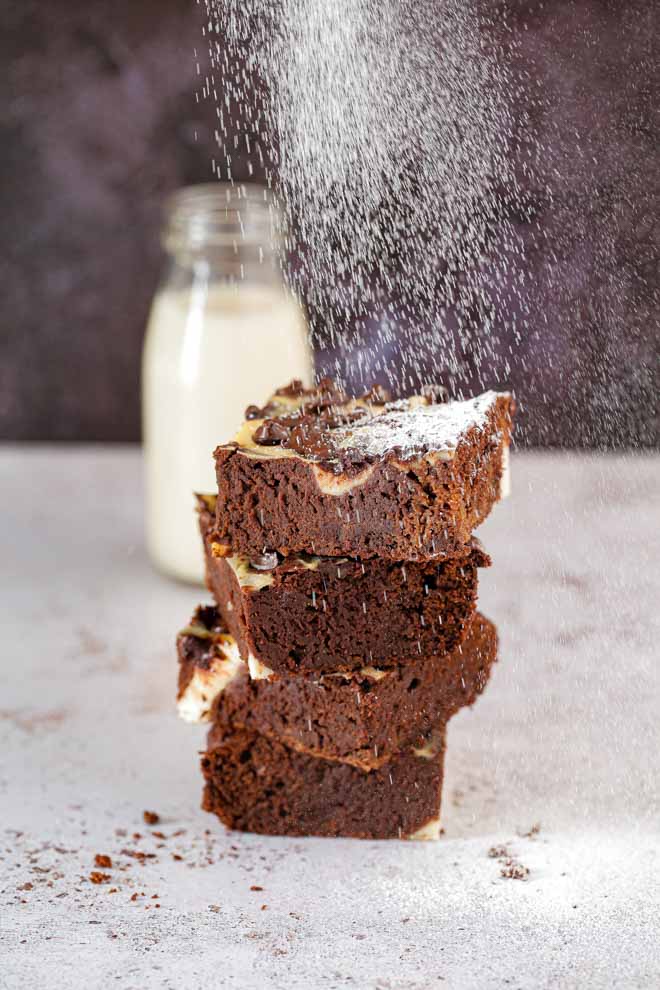