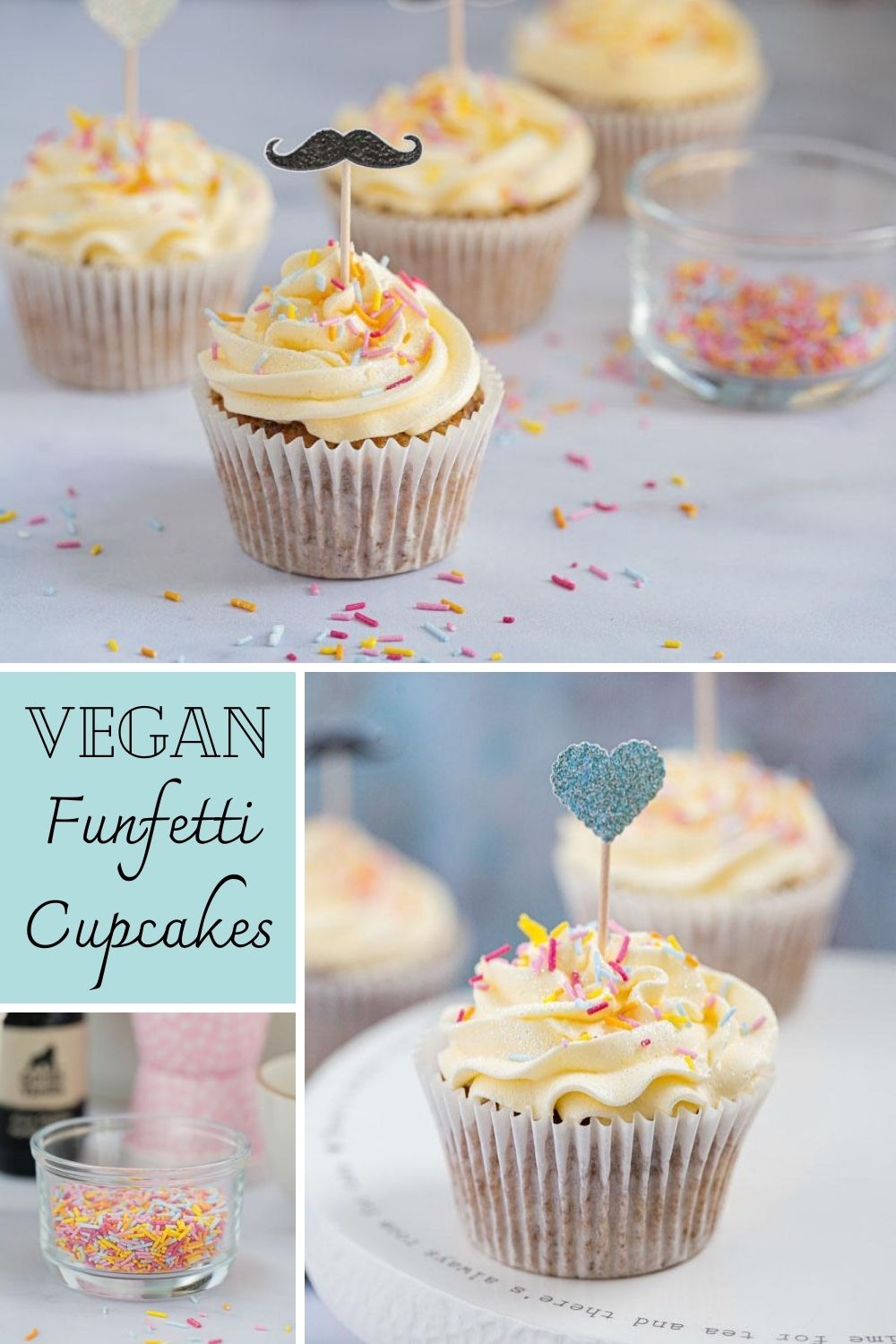 There’s something very happy about funfetti cupcakes.  Those cheerful little sprinkles (and a dash of glitter) just make me smile 🙂

If you don’t know, Phil and I share consecutive birthdays, meaning his is the day before mine (20th and 21st August).  And this year I thought instead of a large cake I’d make adorable little funfetti cupcakes because: 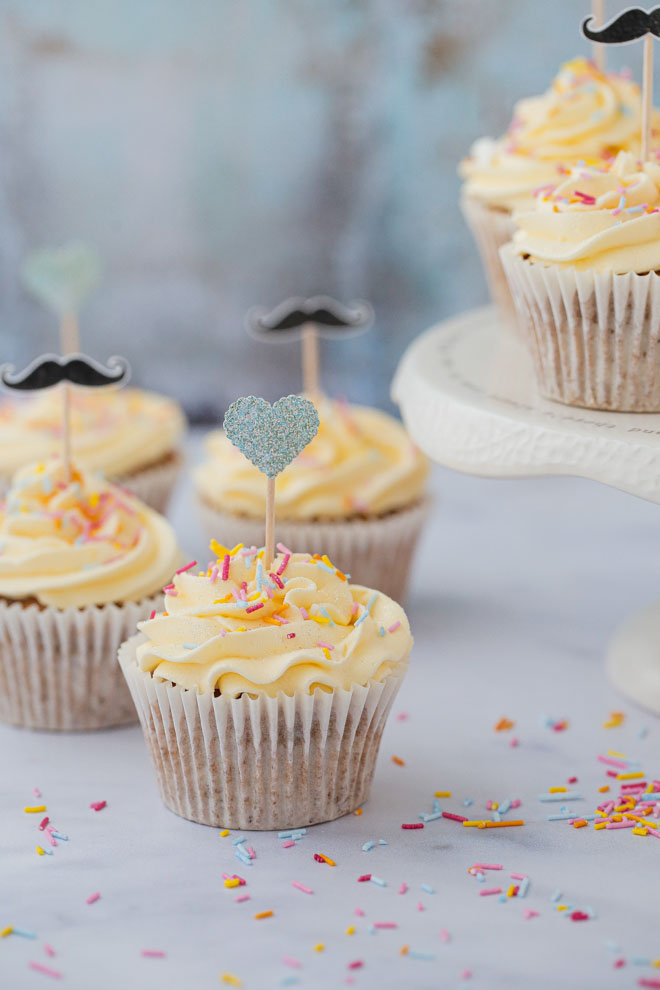 The word ‘funfetti’ has only been around since 1989 when the Pillsbury Company introduced a new type of cake and a play on the words fun and confetti.  It was originally a large white cake mix with multicoloured sprinkles mixed into the batter for people who wanted “a bigger bang out of their next birthday”.  This unique look became a must have at children’s birthday parties.  And as Phil and I are mostly just two large children it seemed more than appropriate I should make them! 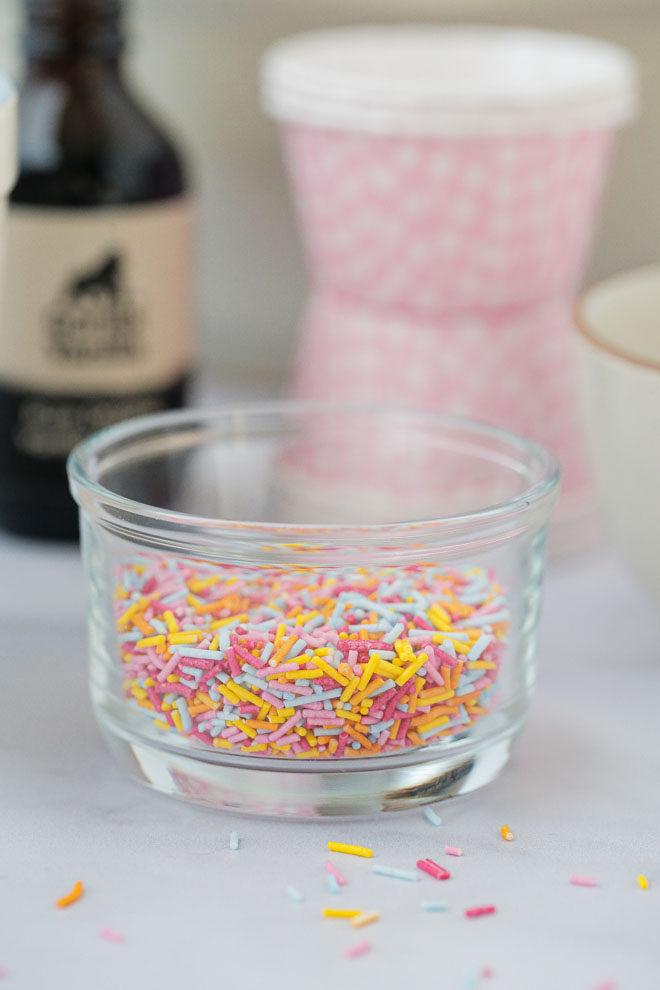 How to make these easy vegan cupcakes:

Just two bowls and a spatula are all that’s needed.  One bowl of wet, one bowl of dry, mix the two together

Stir your sprinkles in a the very end.  Not all sprinkles are created equal so use the best quality ones you can find.  And none of those round balls (or nonpareils) – they are the bane of funfetti anything as they quickly bleed into the batter and you end up with a weird pink/grey mixture.   Also see the note in the recipe about making sure they’re vegan sprinkles. 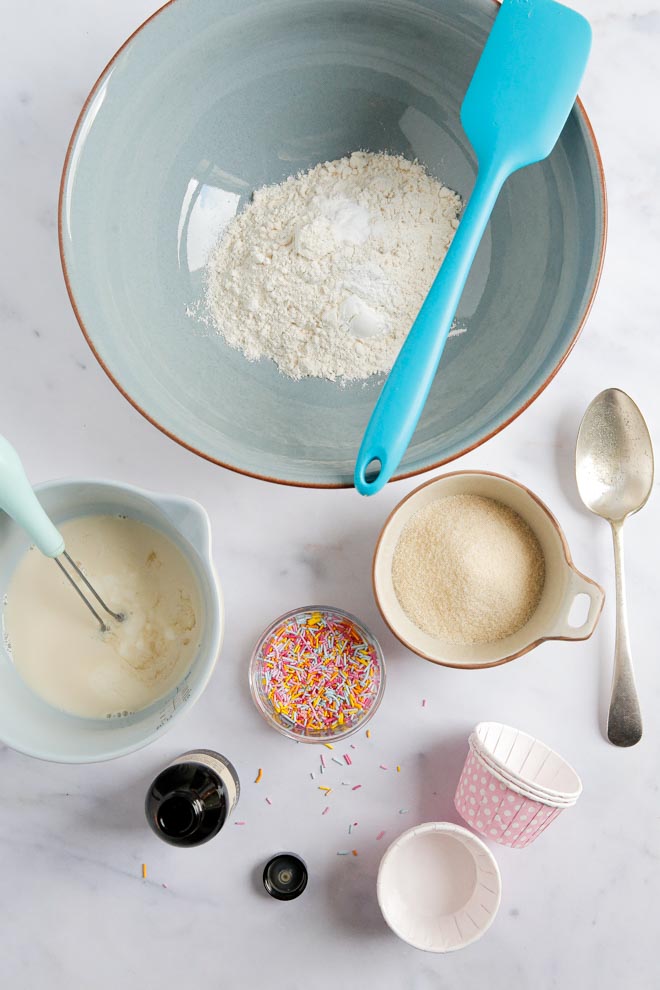 Don’t overfill your cases.  Around 2/3 full is all that’s needed.  And the mistake I’ve made far too many times.  Phil thinks I do it on purpose just so I have to make (and then eat) them again.  This applies no matter what size of case you’re using.  Because I was making these for our birthday(s) I made really large ones, using the large muffin cases rather than the delicate cupcake cases.  If you use smaller cases you’ll get more cupcakes – and they’ll probably take less time to cook. 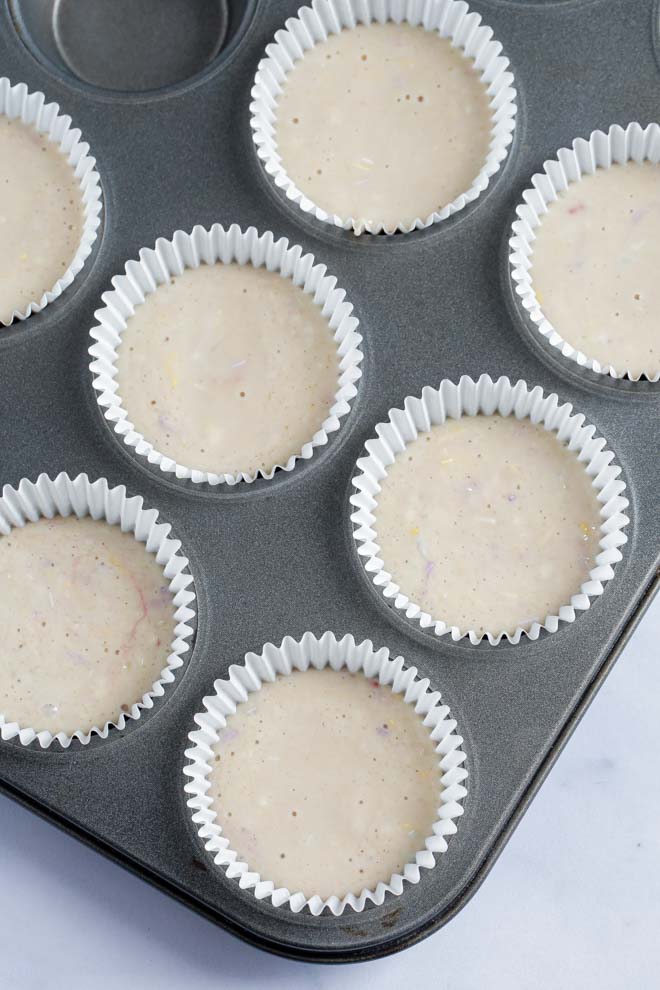 While the funfetti cupcakes are cooling make the vegan buttercream.  This is pretty much exactly like normal buttercream frosting except you use vegan butter.  For buttercream I always use the block type vegan butter rather than the margarine style spread that comes in a tub as it holds its shape much better when piping and doesn’t start to melt from the heat of your hands when you’re holding the piping bag.

I love these disposable piping bags – though I always wash and re-use several times.  I bought one roll of them years ago, so they’re really good value. 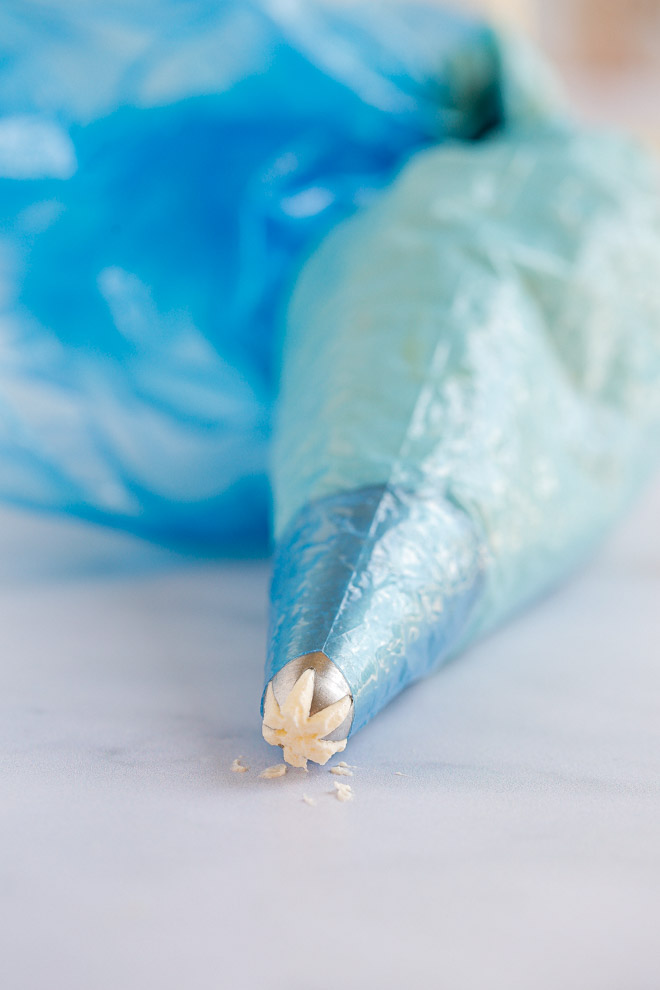 Bake the confetti cupcakes until they’re just set.  You can use a toothpick inserted into the centre of a cupcake and if it comes out clean, they’re done.  Or you can use a finger to gently press the top of one of the cupcakes and if the dent remains in the cupcake they need cooking a little longer.  If it feels spongy and the dent bounces back they’re done.

Leave the cupcakes to cool completely before piping the frosting.  And of course sprinkling with even more sprinkles!  Edible glitter is optional but I do so enjoy it getting caught in Phil’s beard whiskers without him realising 😉 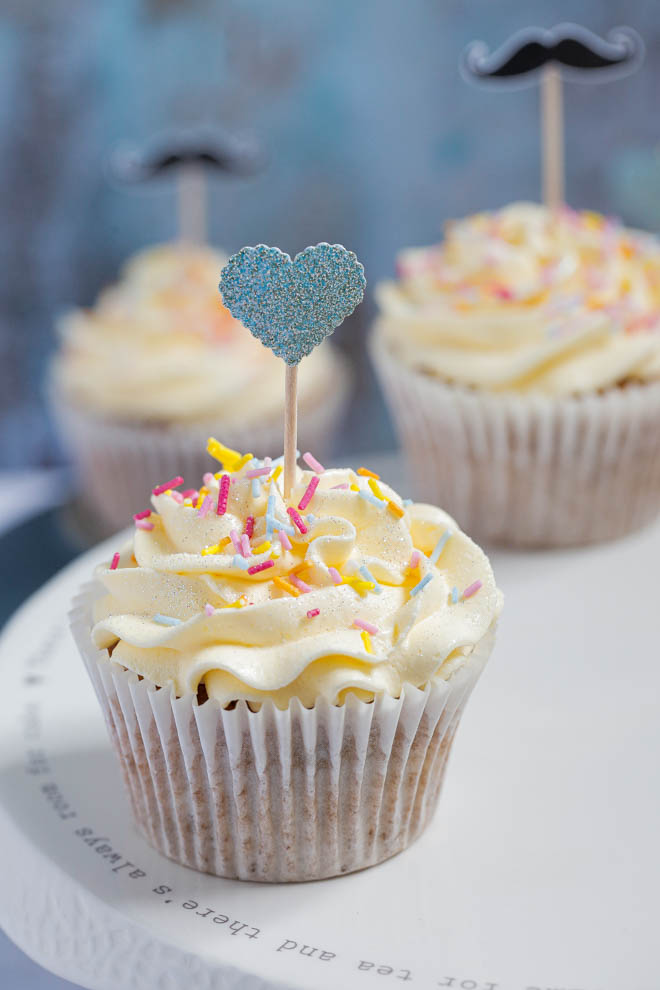 Love vegan cupcakes as much as we do?  Here’s some of tried and tested favourites:

Death by Chocolate Cupcakes (for the Halloween lovers amongst us!)

I’d love to hear from you if you make these Funfetti Cupcakes.  Just leave a comment as it’s so helpful and I love to hear how the recipe worked out for you!  Thank you so much 🙂 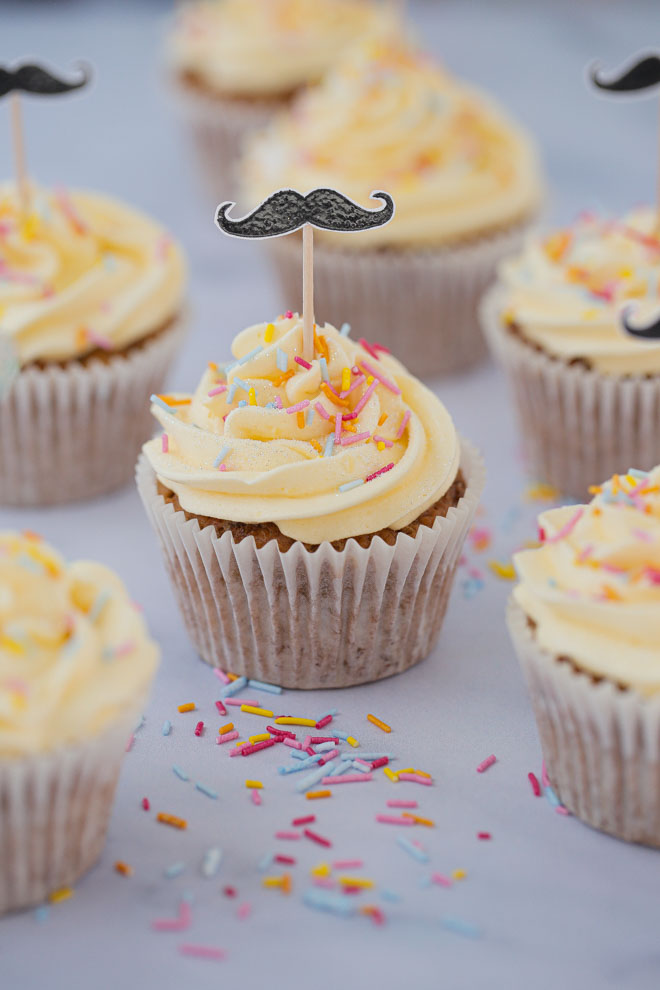