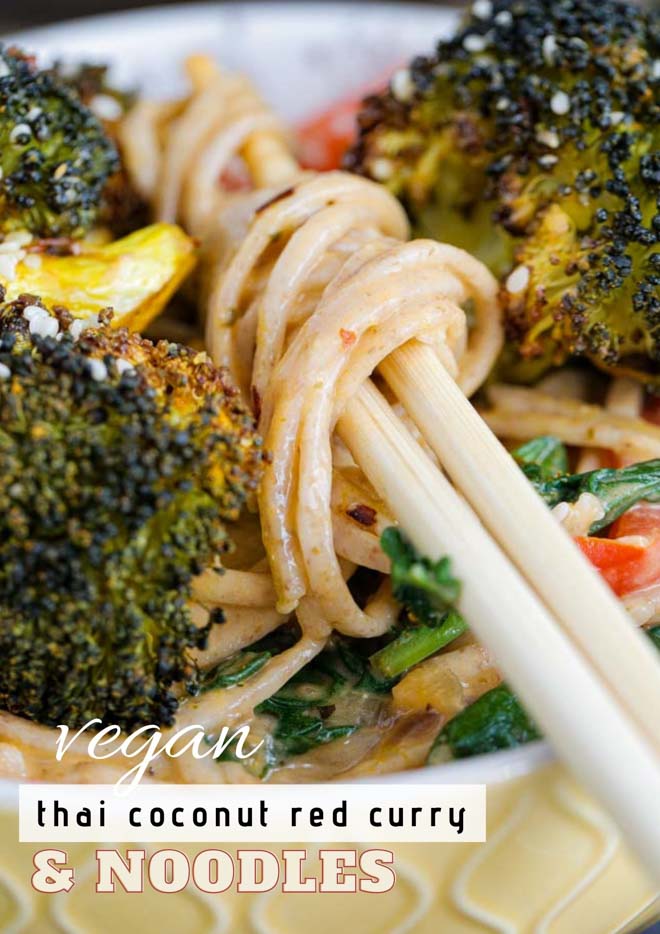 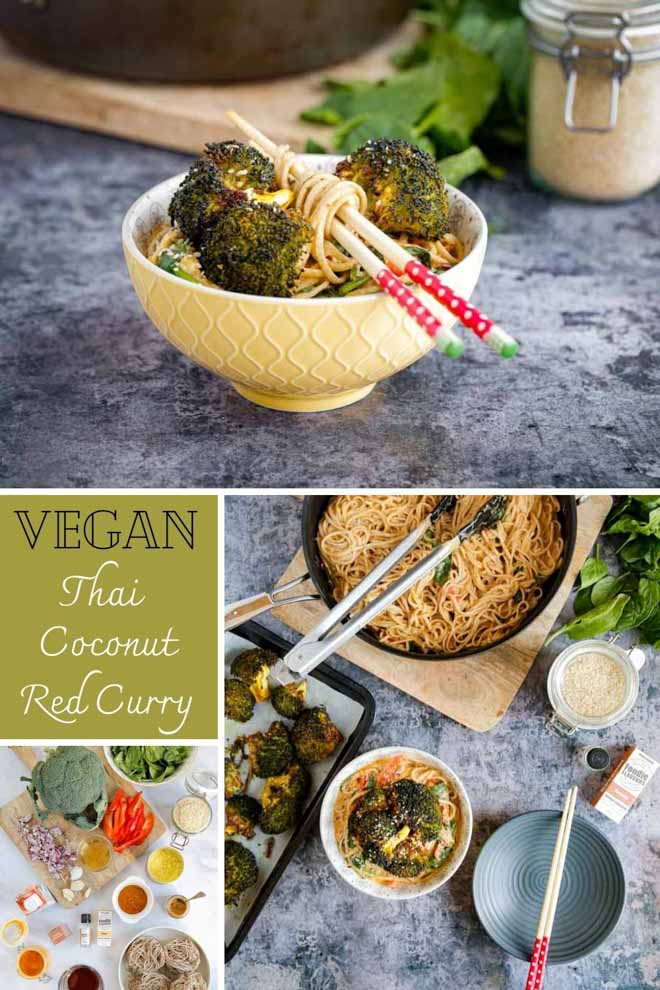 One thing I’ve always loved about Thai food is their use of aromatics.  Thai curries don’t rely on just heat, there are all the wonderful levels of flavour too and I’ve tried to build those into this Thai coconut red curry.

I thought about making my own Thai red curry paste for this recipe.  But one of the things I’ve been trying to focus on lately is quick and easy meal ideas.  Recipes that don’t require a maths degree to work out how to cook everything in a million pans all at the same time.  The secret to making a bottled curry paste taste a little homemade is just a few extra ingredients.

In this case, the aromatics – the ginger, garlic, onion and bell pepper add their own distinct flavours.  Cooking them first releases their ‘aroma’ and builds up those layers of flavour. 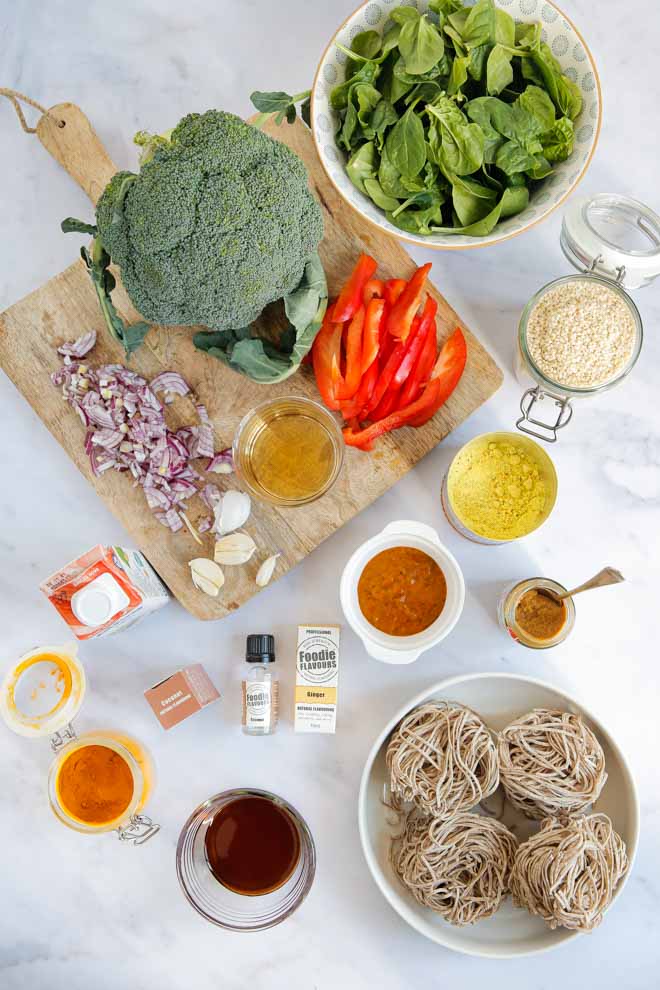 The extra step I’ve added (and it’s entirely optional) is roasted broccoli on top.  We’re absolute broccoli lovers and Phil’s favourite is to have it roasted.  Drizzle it with oil, douse it in herbs and spices and it chars slightly as it roasts, giving it so much flavour.  It becomes crispy too, adding a nice contrast to the soft veggies and noodles underneath. 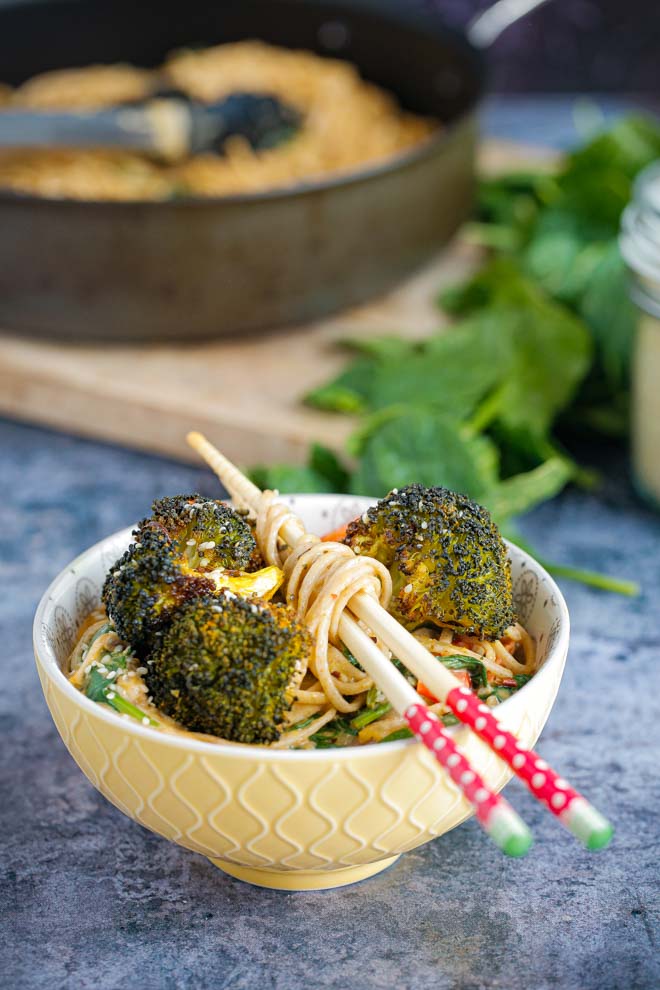 I also use whole wheat noodles.  I honestly can’t taste the difference between whole wheat pasta or noodles and regular ones.  And they’re a little bit healthier with extra fibre and protein.

The other thing I’ve used is Foodie Flavours coconut drops in the Thai red curry sauce and ginger flavouring for the broccoli.  I was going to use fresh ginger but forgot to check it and it had gone mouldy in the fridge.  I’ve added the coconut drops because adding coconut milk doesn’t give it very much actual coconut flavour.  The coconut drops add a whole new level of deliciousness.  And I wanted to use vegan cream to give the sauce a really rich and silky texture. 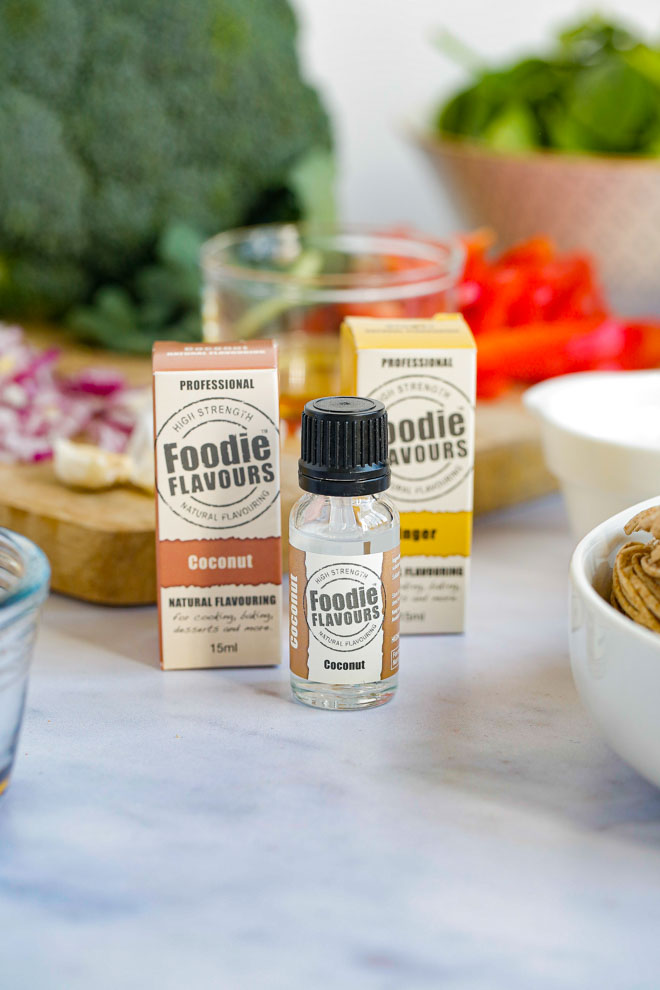 How to make a super easy Thai Coconut Red Curry:

Roast the broccoli.  Toss it first with a little oil, a few drops of ginger, some turmeric and plenty of salt and pepper.  It takes about half an hour to crisp and lightly char, plenty of time to make the curry. 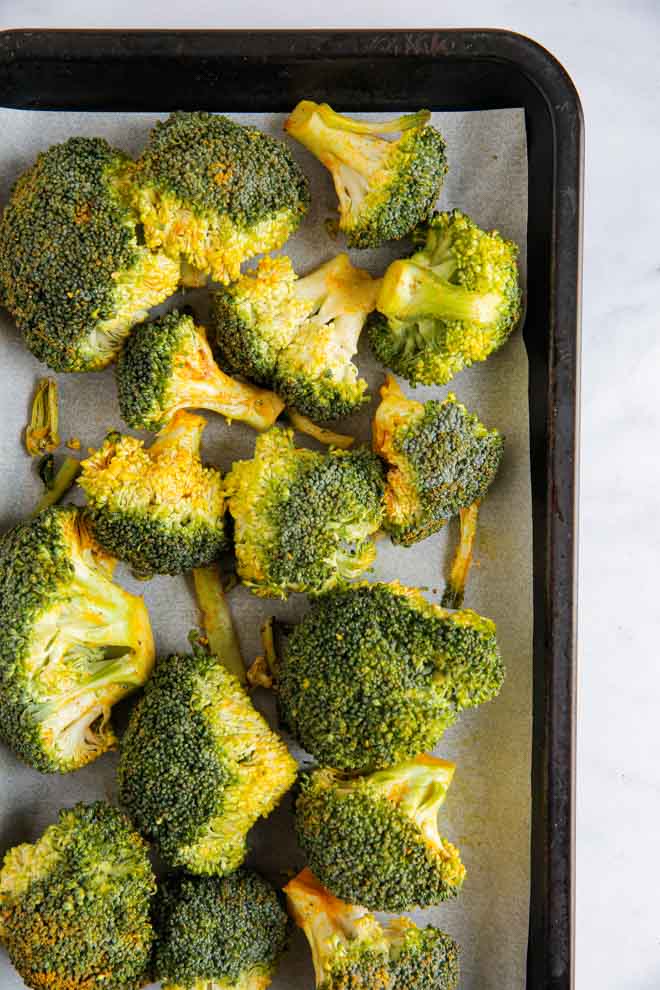 Sauté the veggies in a large pan.  That’s the sliced onion and peppers.  Cook for a minute or two in some sesame oil until they’re just starting to soften and caramelise.

Add the garlic and Thai red curry paste.  Cook for a further minute to release all those wonderful flavours and spices in the paste.

Stir in the cream, soy sauce, veg stock, miso, agave and coconut drops.  I use about 15-20 drops.  Start with a smaller amount, taste and add more for a stronger flavour.  Add salt and pepper to taste too.

Add the water and bubble gently for 3-4 minutes.  While that’s bubbling, cook the noodles according to packet instructions.

Stir the spinach and cooked noodles into the Thai red curry sauce. Cook until the spinach has wilted and the noodles have absorbed some of the sauce.

To serve, put some of the noodles and sauce into a bowl and top with the roasted broccoli.  Sprinkle with some sesame seeds to finish!

If you like your curry fiery, you can sprinkle in some chilli flakes.  But I think this is tasty enough without too much heat and has become a weekly go to when we want something delicious without a lot of effort. 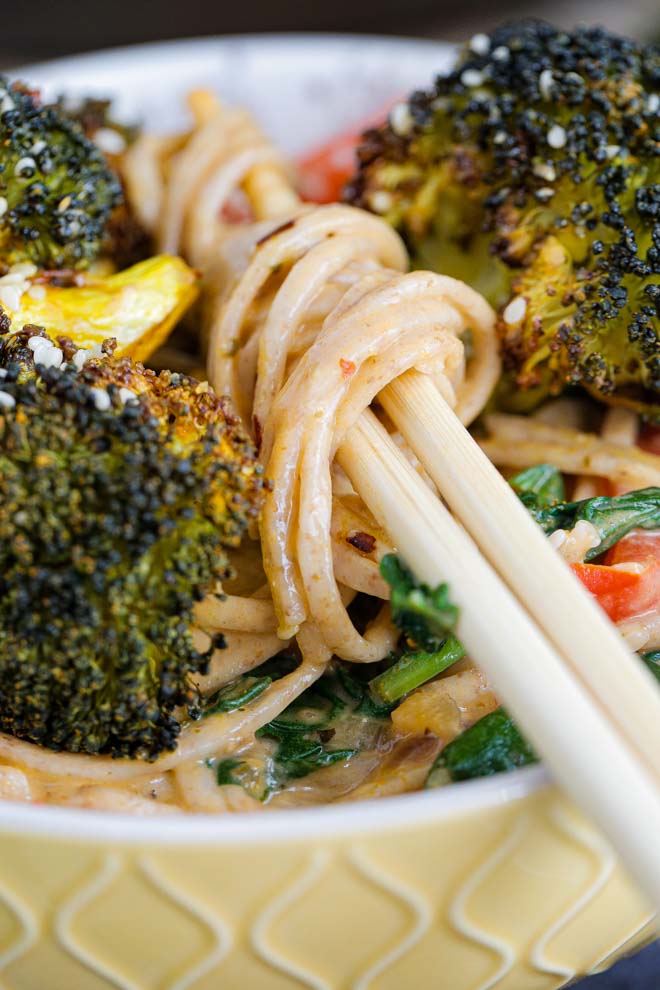 Looking for more quick and easy vegan meals?  Try these …

Vegan Enchiladas with Spinach and Lentils

I’d also love to hear from you if you make this Thai Coconut Red Curry with Noodles! Just leave a comment as it’s so helpful and I love to hear how the recipe worked out for you! Thank you so much! 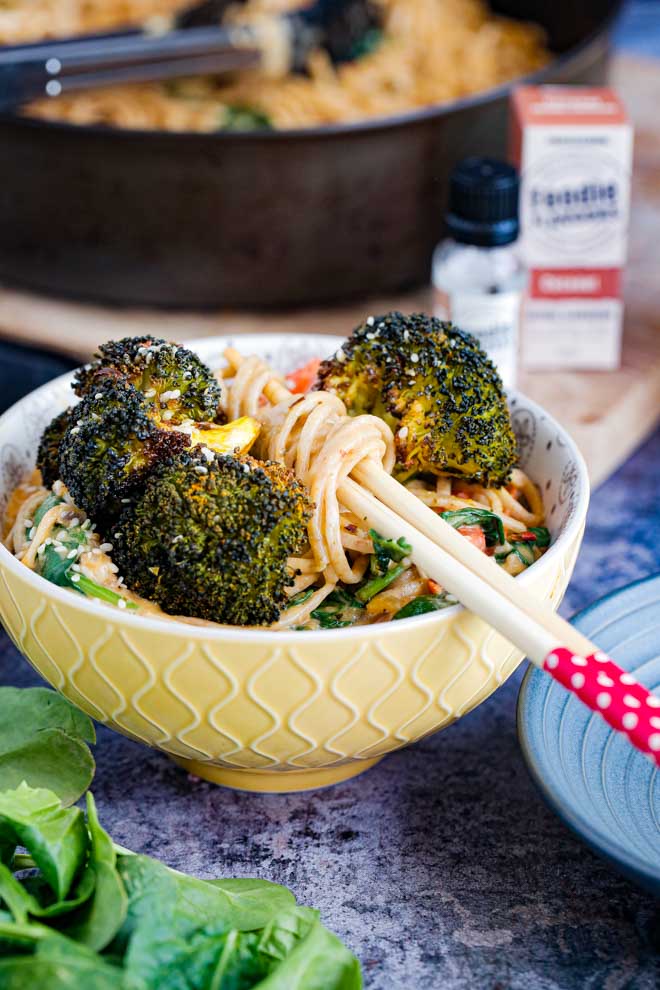