Dauphinoise Potatoes with Leeks and Rosemary 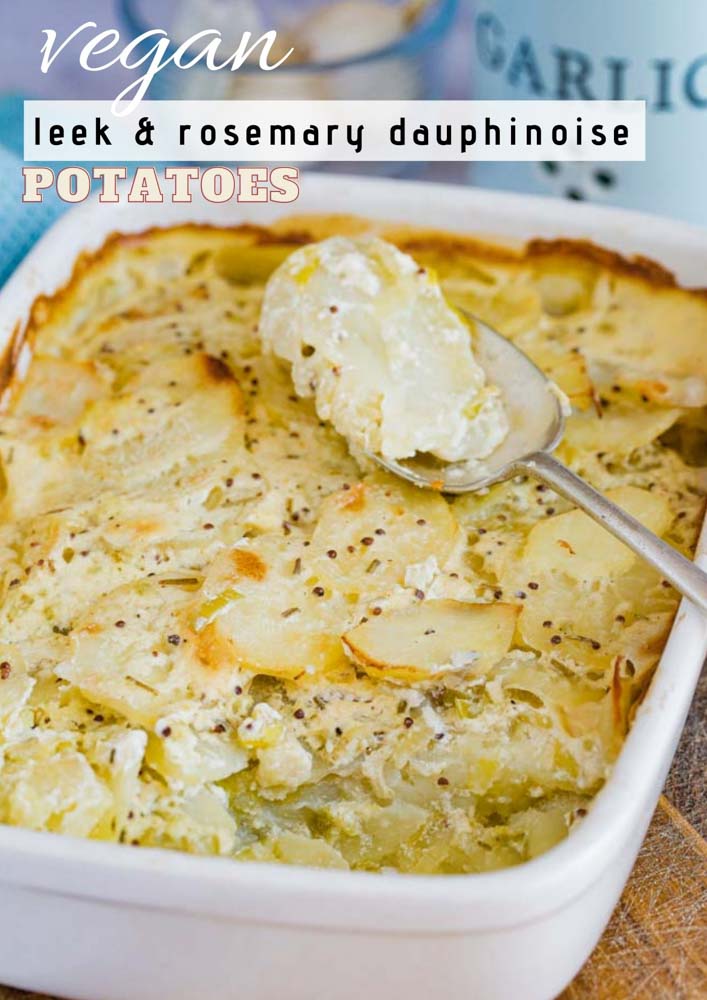 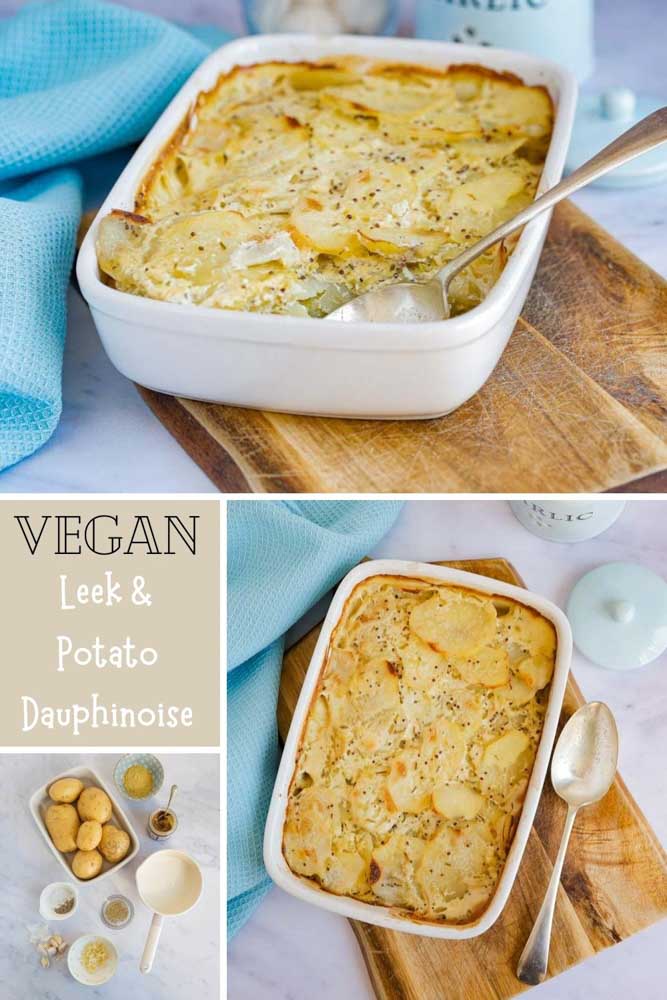 Layers of leek and potato with a rich garlic, rosemary and mustard cream sauce takes these vegan dauphinoise from delicious to extraordinary! So simple to make and so satisfying to eat!

Dauphinoise has always been one of my all time very favourite dishes.  It’s soft, creamy, garlicky layers and crisp, almost buttery, top is a thing of legend.  It was one of my dad’s favourites too.  So this is my vegan homage to my Dad and all things that make eating so pleasurable!

I tried making vegan dauphinoise quite a while back with vegan milk and it was ok.  Certainly not the rich, creamy dish I remember from my non-vegan days.  It was a bit lacking.  And a bit too watery.  But now we have vegan cream and it’s wonderful!  I use both Alpro soy single cream and Elmlea plant double cream for all sorts – both sweet and savoury vegan recipes.  They make a great quick pasta sauce or creamy curry.  And of course, work perfectly in vegan dauphinoise!

Potato purists might say you have to use a certain type of potato for the best dauphinoise.  I’ve recently been buying perfectly imperfect veggies – carrots, parsnips, berries for smoothies and potatoes.  There’s nothing wrong with them flavour wise, they’re just not all perfectly symmetrical.  And that’s fine by us. 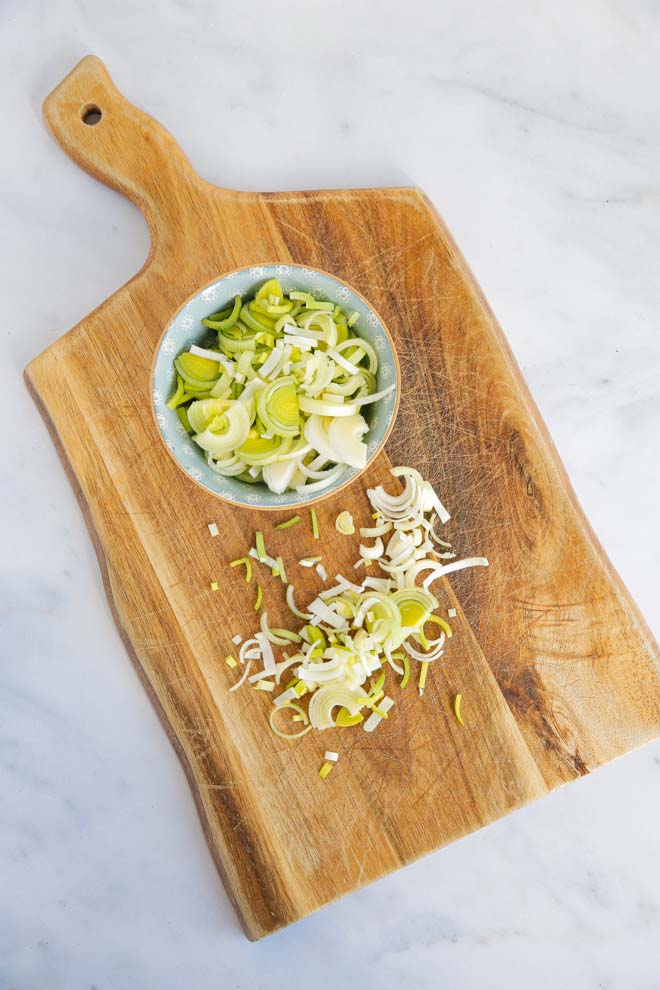 A traditional dauphinoise doesn’t usually have leeks in it either.  But I had a spare leek in the fridge and thought I’d try it in a dauphinoise.  Worked a treat!  Leeks are a milder flavour than onions and baked in a dauphinoise they become creamy, rich and almost buttery layered between the potatoes.

I’ve also added mustard, rosemary and nutritional yeast to the cream mixture.  Just because I love them and wanted to bring even more flavour to the already wonderful thing that is dauphinoise potatoes.

Random true story – one of our friends has a sister that thought this dish was called Dolphin Nose Potatoes.

I’ve always made dauphinoise by warming the cream with the garlic.  Bring the cream and garlic to a gentle boil, turn off the heat, whisk in the mustard, nutritional yeast, rosemary and plenty of salt and pepper.  Leave those flavours to infuse together while you prepare the leeks and potatoes.

Peel the potatoes and finely slice each one.  You can do this on a mandolin or by hand.  It’s important that they’re not too thick but just as important is that they’re all roughly the same thickness.  This will help with even cooking.

Slice the leeks and thoroughly wash.  Lots of bits of grit and dirt gets trapped in the layers of leeks.  No-one wants a crunchy bit of dirt in their soft and creamy potatoes! 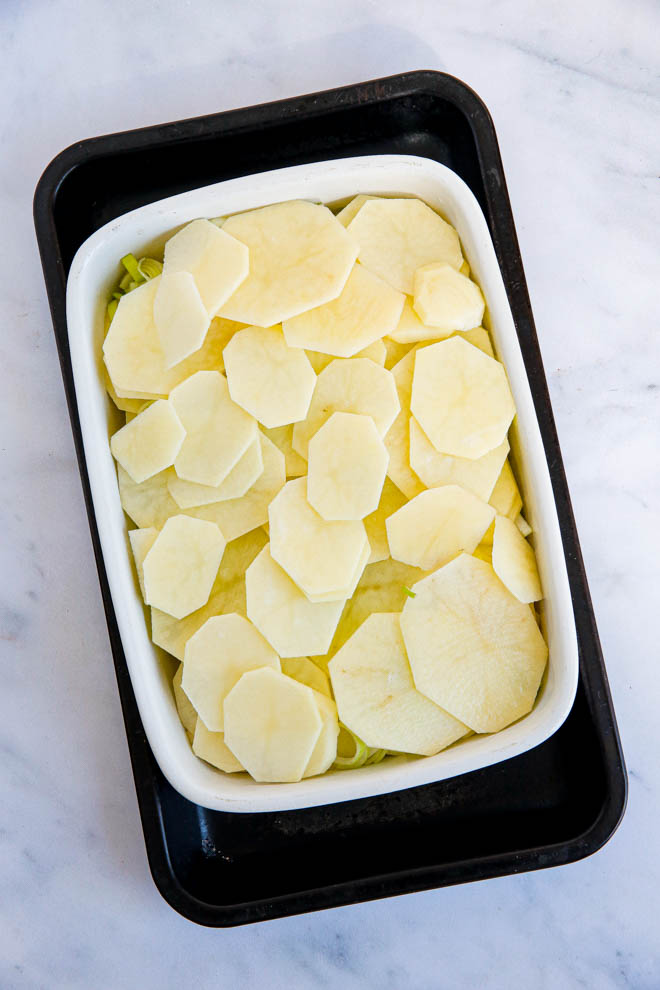 Give the cream mixture another whisk.  Then pour it over the potatoes, making sure to scrape any bits of garlic out of the pan.  Cover the baking dish with foil and bake in a preheated 180 fan oven for 1 hour.  Pro tip:  lightly grease the foil before placing onto the baking dish – this will help prevent the potatoes from sticking when you remove the foil! 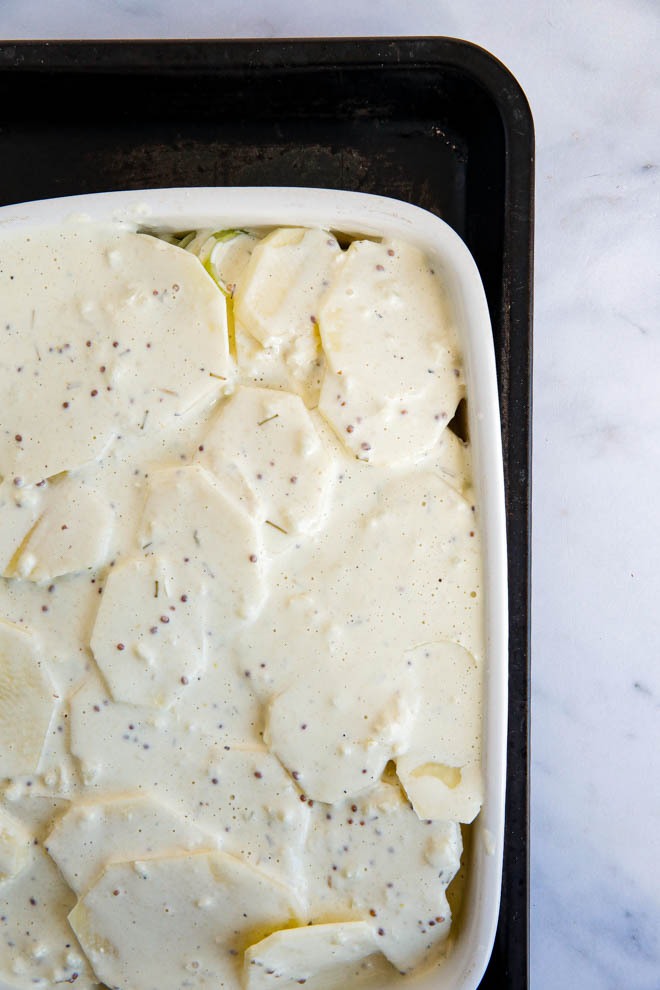 After 1 hour remove the foil.  Then return to the oven for a further 15-20 minutes until the top is crispy, golden and bubbling. 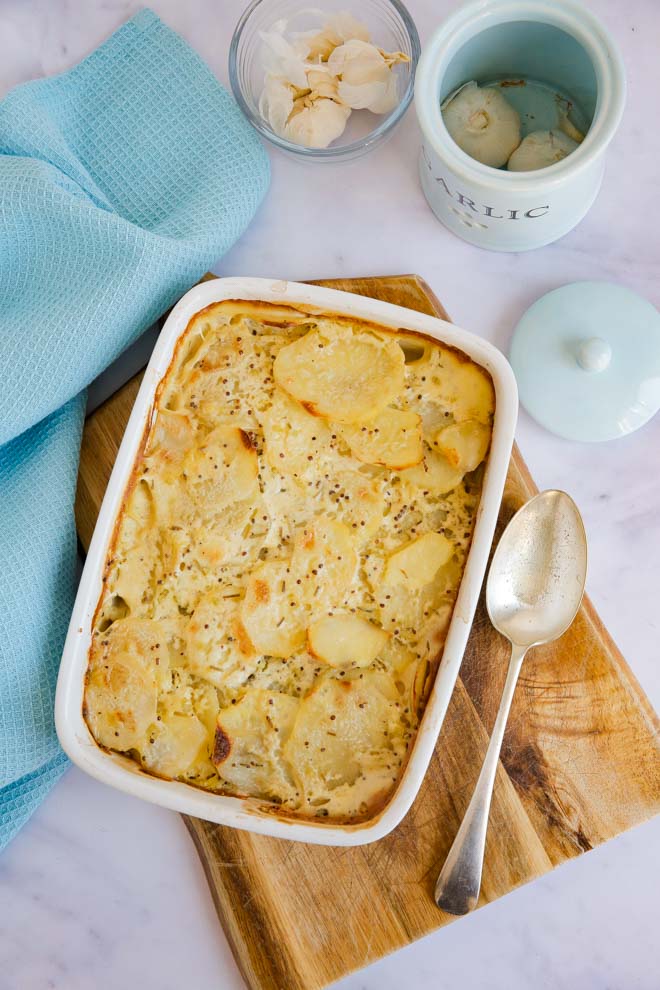 Is it wrong that I can sit and eat this straight out of the dish?  Not as a side but as the main part of the meal.  Honestly, I’m so glad vegan cream is a thing.  Nothing beats a bubbling dish of creamy, garlicky potatoes.  Except maybe cake.  Or cookies.  Or brownies.  Or bread.  Any bread.  Dauphinoise sandwich?

Looking for more ways to make veggie side dishes the star of the show?   Try these:

I’d also love to hear from you if you make this Vegan Dauphinoise with Leeks and Rosemary! Just leave a comment as it’s so helpful and I love to hear how the recipe worked out for you! Thank you so much!

Dauphinoise Potatoes with Leeks and Rosemary 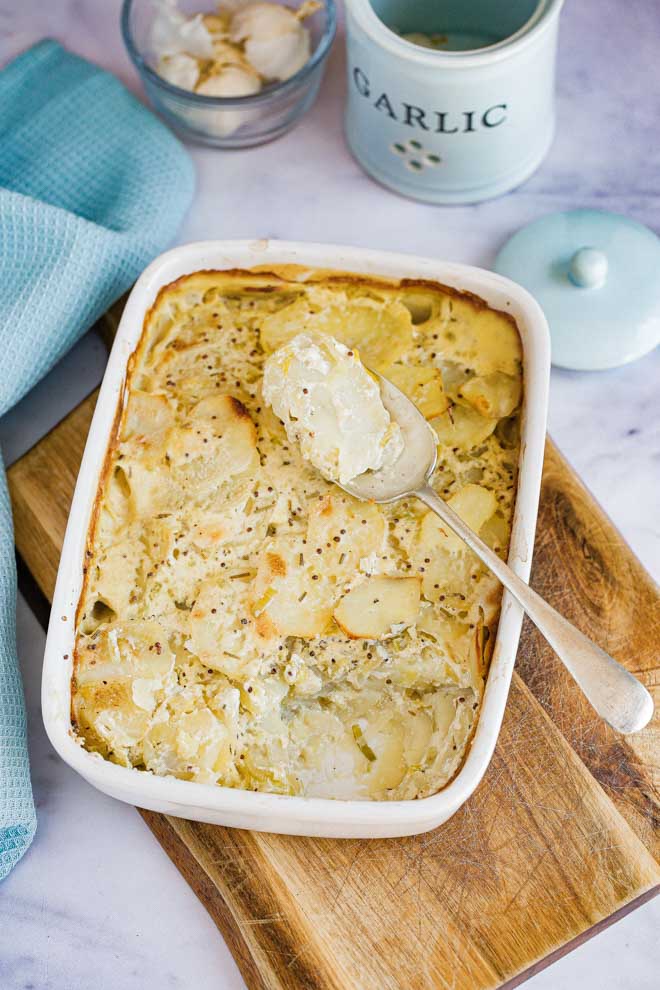